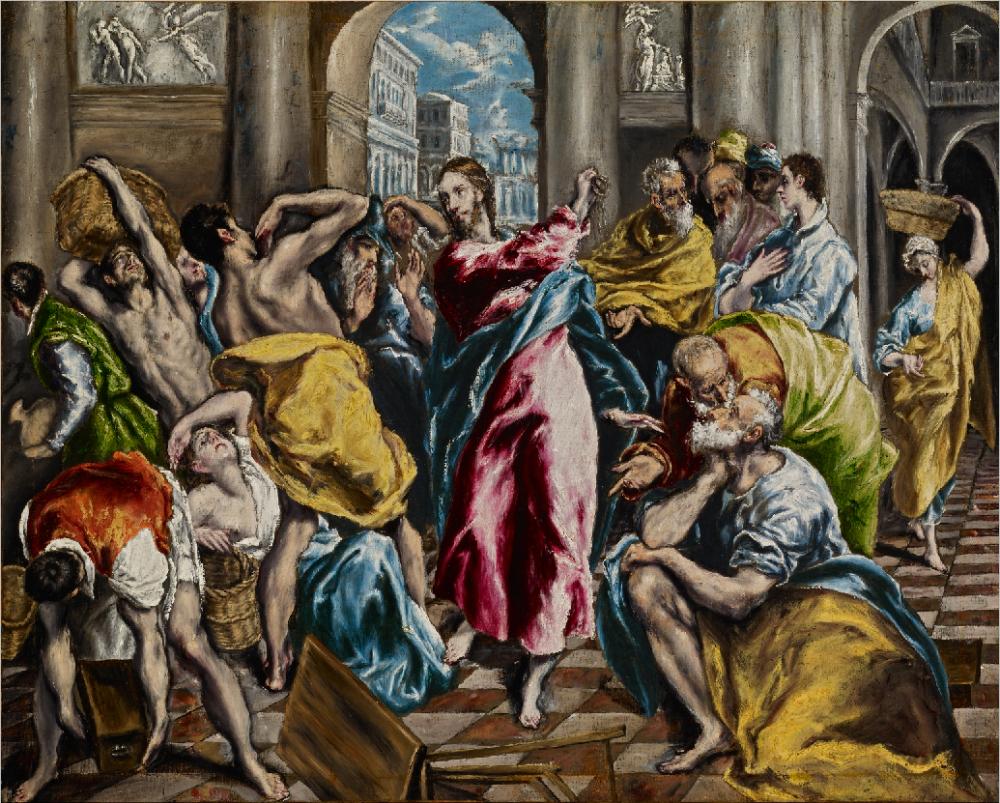 Sermon for the Third Sunday in Lent

‘And the Jews’ passover was at hand, and Jesus went up to Jerusalem’

Our Lord enters into the courts of the Temple, erected by Herod the Great, and so we begin to see the fulfillment of what was spoken by the prophet Malachi: ‘Suddenly,’ it is written ‘the Lord whom you seek will come to His temple; the messenger of the covenant in whom you delight, behold, He is coming.’

Again, we see that He has come. The Lord comes to His own house, built by the pious and repentant hands of His own people.

‘And found in the temple those that sold oxen and sheep and doves, and the changers of money sitting.’

It was essential that there be money changers in the Temple, for the money of the gentile nations displayed upon themselves the images of foreign gods, or deified rulers; of idols, hateful to the Lord. So the Jews would exchange this pagan silver for a sheckel, a coin, which had no images, for it is written ‘thou shalt not have any gods before me; thou shalt not make unto thee any graven image, or any likeness of any thing that is in heaven above, or that is in the earth beneath.’

Thus would the Jews buy their holy sacrificial animals with sanctified silver, purified of any graven image.

Again, we see that He has come. The Lord comes to His own house, built by the pious and repentant hands of His own people.

‘And’ yet ‘when he had made a scourge of small cords, he drove them all out of the temple, and the sheep, and the oxen; and poured out the changers’ money, and overthrew the tables.’

He scourges the people. It is not written that he scourges the money-changers; those who exchanged heathen money for holy silver. No, see what is written: ‘he drove them all out of the temple, even the sheep, and the oxen.’ Not just money-changers; he scourged pious pilgrims, come to celebrate the Passover; he scourged god-fearing Jews, observing the sacred feasts. Priests, in the line of Aaron, Our Lord did not spare, nor did he spare any teacher of the Law. Even those animals, blameless, and without spot, once demanded by the Lord himself as a burnt offering he whipped and drove out.

It is often said that the Lord cleansed the temple because the money-changers were engaged in some evil, some greed, by trading in the silver offered of the Jewish people. Yet these men are not evil, at least no more evil than we are, for Moses commanded in the book of Exodus: ‘And you shall take the atonement money of the children of Israel, and shall give it for the service of the tabernacle, that it may bring the people of Israel to remembrance before the LORD, to make an atonement for your souls.’

The money-changers were doing nothing but that which was commanded of God, to take the atonement money for the Temple, that forgiveness may be had for the sins of the people.

How does the Lord explain Himself? For was it not He who had commanded the Jews concerning the Passover and the Temple, concerning the sacrifice of animals, and of the shekel of silver?

Behold, He declares: ‘Take these things away; make not My Father’s house a house of business.’

Our Lord has come to fulfill the prophecy spoken of the prophet Zechariah: ‘[And in the Day of the LORD] there shall no longer be a trader in the house of the Lord of hosts.’

Indeed, there shall no longer be a trader, for there will no longer be a need for trade, for shekels, for silver, for buying and making of sacrifice, for the slaying and burning of sheep and oxen. Indeed, in the Day of the LORD, it shall all be done away with. A better sacrifice shall come; a truer offering shall be made, that offering spoken of in the 69th Psalm: ‘I will praise the name of God with a song; I will magnify him in thanksgiving; For such will please the Lord more than an ox or a bull with horns and hoofs.’ The sacrifice of him who comes persecuted in praise of the Lord, the very ‘lamb of God, that taketh away the sin of the world.’

What is this house? It is the same house Christ has spoken of when he said ‘Destroy this temple, and in three days, I will raise it up.’

It is the same house the Psalmist sang of when he declared ‘May I dwell in the house of the Lord forever.’

It is the same house that St. John shows forth when he writes: ‘But Jesus Spoke of the temple of his body.’

Again, we see that He has come. The Lord comes in the house of his body, built within the pious and repentant womb of the virgin Mary. A new temple has been born for us. A new temple has entered into Jerusalem, there to do away with the old, with all its blood and sacrifice, there to replace it with one blood, one sacrifice: the blood and sacrifice of Our Lord and God, Jesus, the Christ.

Jesus goes forth unto Jerusalem, and we follow him this Holy Lenten Season, to see him ‘high and lifted up’ ‘as a light to the world.’ To see the Father fulfill in Him His own prayer: ‘I am afflicted and in pain; let your salvation, O God, set me on high!’

‘Behold, he is coming’ ‘afflicted and in pain’ that his salvation may shine upon Mount Zion, between two sinful men, his body offered, and blood shone like a flood. Our redemption, bought at a price.

‘The messenger of the covenant, in whom you delight, behold, He is coming.’

‘And the Passover was at hand, and Jesus went up to Jerusalem.’