Ecclesia: Who We Are

Christ Lutheran Church, LC–MS,  is a congregation where those baptized into the redemption of Our Lord Jesus Christ are strengthened for life in the world and nourished unto life everlasting through the gifts of the Lord’s blessed Word and most holy Sacraments.

We rejoice in the wisdom and insight of the saints throughout the millennia, and we cherish and confess the faith of the Reformation as contained in the Ecumenical Creeds and the Confessions of the Evangelical Lutheran Church.

Here, you will hear God’s Word preached in its purity and truth, our Lord’s Sacraments rightly offered, and the wisdom of the Holy Scriptures taught through the celebration of the historic Liturgy and regular study groups.

As Lutherans, we believe that true worship is not about what we have to give to God, but about what God has and continues to give to us: forgiveness, life, and salvation, through the preaching of His Word and the mystery of His Sacraments. Therefore, we gather every Sunday, and all other observed feast days, to participate in the historic Liturgy of the Church, there to hear the preaching of the Word and receive the endless blessings of the Lord’s Supper. In this worship, we confess the essence of our faith: Salvation by grace through faith, purchased by Christ’s atoning sacrifice and poured out for us through His Word and Sacraments.

Born into the Body of Christ through baptism and being renewed weekly in receiving that most Holy Communion, we believe we are truly members of His One Body. Therefore, we express this union with our fellow members by living together as active participants within the community of the Church. Likewise, as Christ, the Lover of Mankind, came to those who knew Him not, so we too extend His love to those outside the Church.

As a community of faith united together in our confession of Christ and of the teachings of his Apostles, studying the Word of God is central to our life together. Christ Lutheran therefore offers many opportunities for ongoing education and catechesis in the Scriptures and the teachings of the Christian Faith. 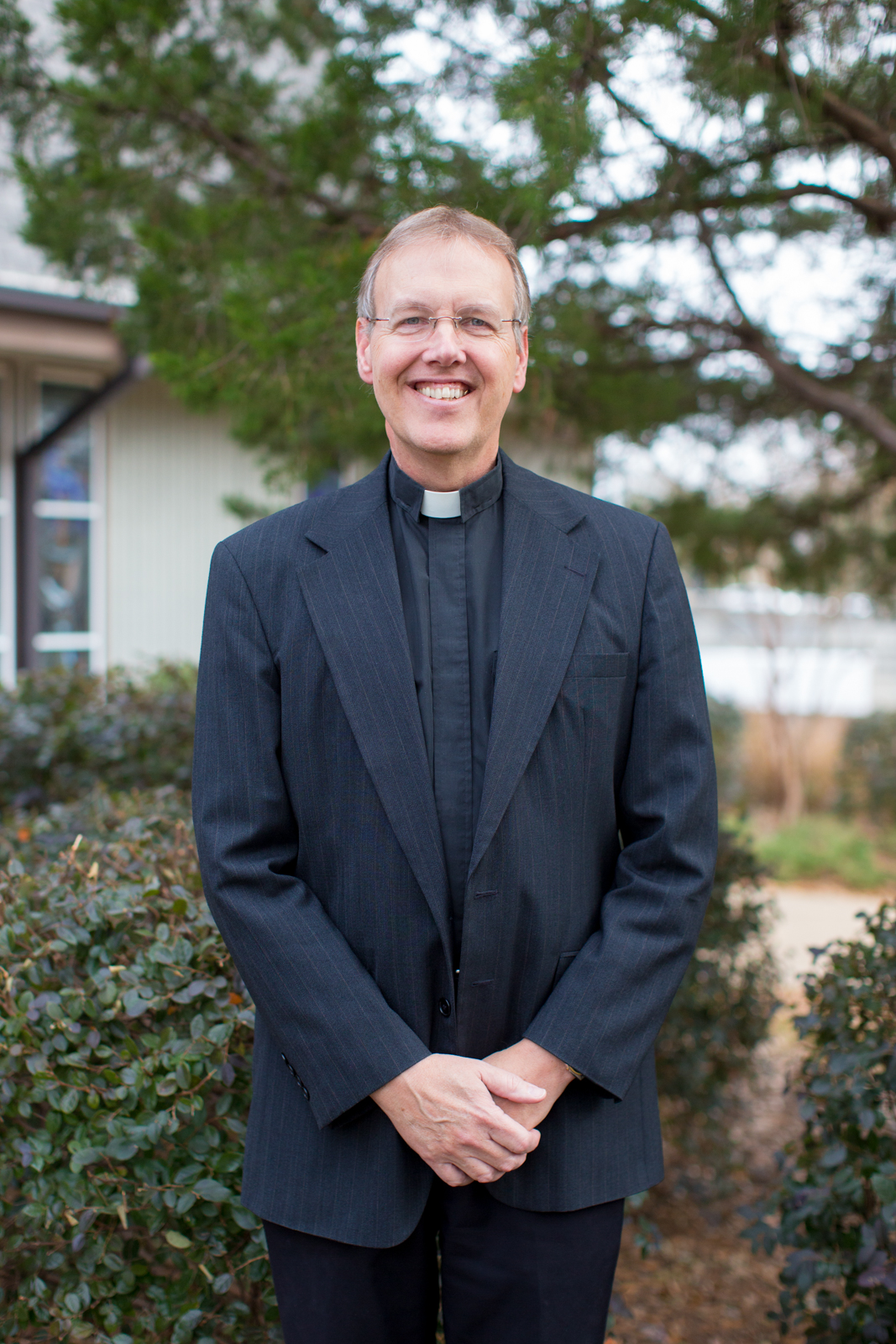 An adult convert to Christianity, Rev. Dr. James Holowach holds degrees in the sciences from the University of California and University of Mississippi, and practiced medicine for fifteen years before enrolling at Concordia Theological Seminary, Ft. Wayne, IN. After receiving his Master of Divinity in 2004, he was called to Christ Lutheran Church where he continues to serve. He and his wife Susan have two daughters, both of whom married Lutheran pastors, and when not figuring out ways to visit children and grandchildren, he maintains a fascination with all things philatelic (stamp collecting) in addition to listening to music, making music, and battling to keep peace and good order in the yard. 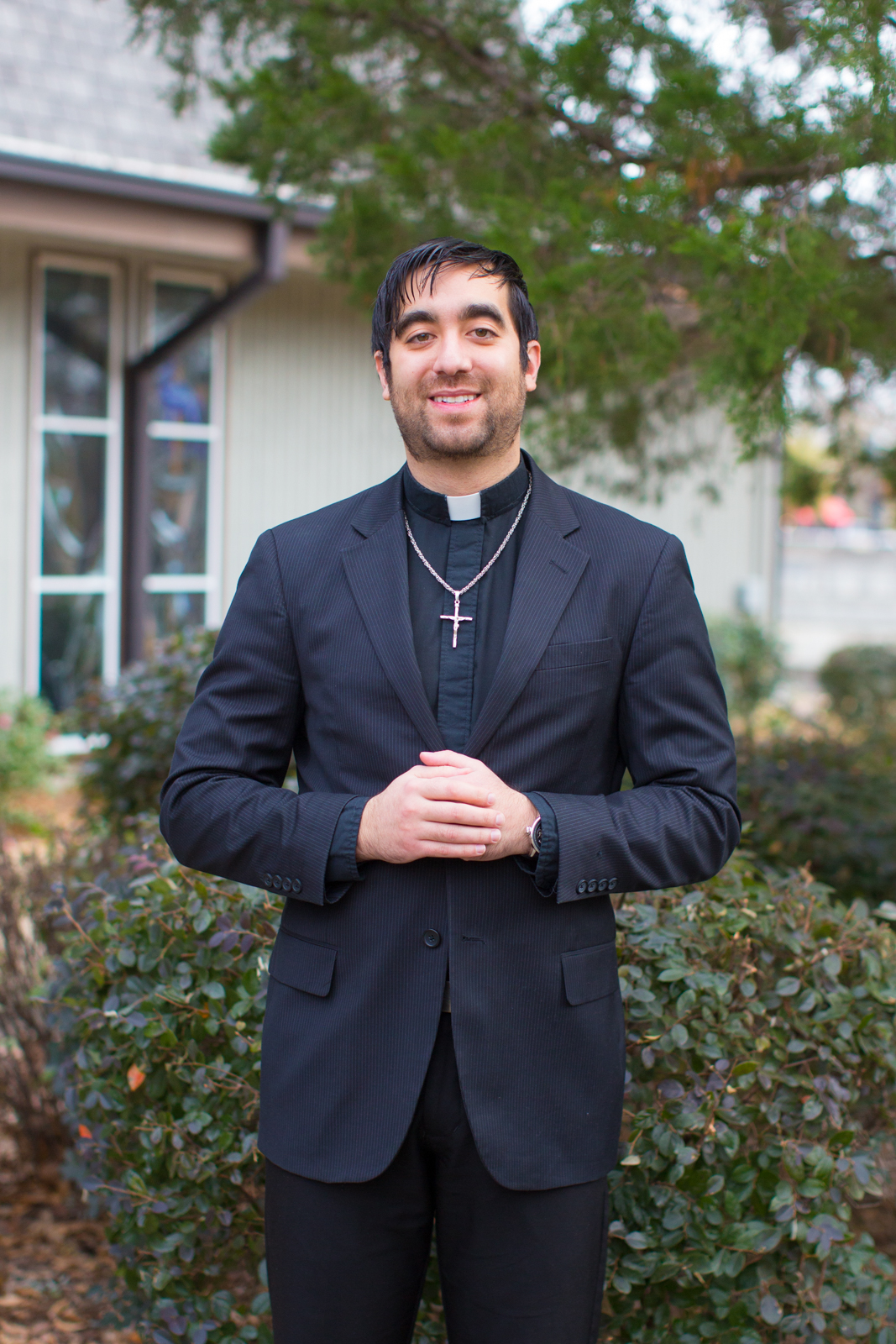 Rev. George Fields graduated from Concordia Theological Seminary in Fort Wayne, Indiana, with a Masters of Divinity in 2017. Previous to that he matriculated from George Mason University with a degree in Linguistics and competency in French, Chinese, and Japanese. A native of rural California, he spent his formative years in the Byzantine madhouse of the Washington, D.C. metropolitan area. Beyond theology and linguistics, his interests include classics, history, philosophy, cooking, and the sciences. He is also known to repeatedly fail at learning to play classical guitar, but he is commended by his kindly and musically gifted wife for continuing the struggle.

Sister Sara Fields is a 2016 graduate of Concordia Theological Seminary, Fort Wayne, IN, where she received a Masters of Arts in Theology and Deaconess Certification. Fated to be an organist from an early age, her childhood piano teacher persuaded her to trade in hammers for pipes, and consequently set her on a path to a Parish Music degree from Concordia University in Seward, NE. There she studied under Dr. Jeffrey Blersch before proceeding to the seminary to join the diaconate. Sister Sara enjoys long walks and learning about all things classical, especially from her rather knowledgeable husband. Also, she has recently acquired a love of cooking, which fortuitously compliments her love of company.

That’s where it all began in January, 1957, when the Baptized children of God at Our Redeemer Lutheran Church in Jackson unanimously resolved to “adopt and organize a mission of Our Redeemer congregation to be located in the northern section of Jackson, Mississippi and that services be held the first Sunday in February, 1957.” Going forward by faith, Christ Lutheran Church conducted their first worship service on February 3, 1957 with thirty-three people in attendance. By April, fourteen families requested transfer of membership to the new mission, and in May the present property was purchased for $25,000. A candidate was called from Concordia Seminary in St. Louis, and on August 4, 1957, the congregation installed their first pastor, Rev. John D. Huber.

Within months, the new pastor and his small flock began the task of constructing a new building for the church. Ground was broken on December 8, 1957, and the present building was completed 6 months later. A service of dedication was held on Sunday afternoon, June 15, 1958.

We look forward with great joy, trusting in Him alone to write the next page of our life together at Christ – the life we share IN Christ.

The hand-crafted silhouette of Christ in the chancel was developed by the Ecclesiastical Arts Department of Concordia Publishing House, St. Louis, MO, and was dedicated on June 25, 1967 in memory of John Clemmer who served as first president of the congregation. The silhouette and the words from Matthew 11:28, “Come Unto Me, All Ye Who Labor, and I Will Give You Rest,” continue to provide an inspiring focal point for all who come before the Lord to receive His gifts of forgiveness for life and salvation.

In the years that followed, the congregation at Christ Lutheran Church continued to receive God’s gifts and blessings, worshipping and fellowshipping together, sharing weddings and funerals, baptisms and confirmations, and working together in various outreach projects. The congregation grew, and a large building addition of Sunday School rooms and a Fellowship Hall was dedicated on February 13, 1983. Now celebrating over 50 years of life together at Christ Lutheran Church, we thank and praise God as He continues to provide His gifts and to have good use of us to share His gifts for the life of the world.