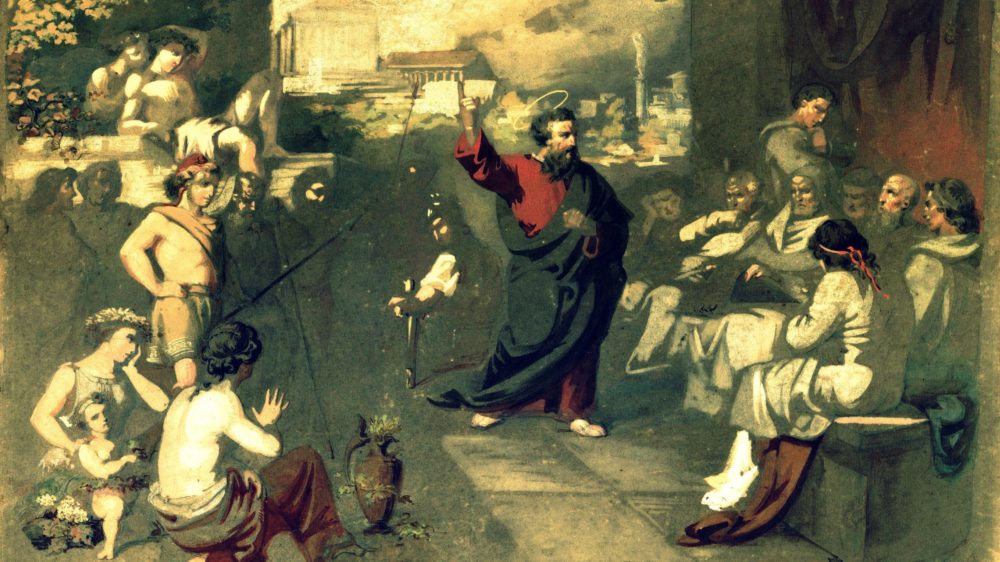 Sermon for the Sixth Sunday of Easter

“I found also an altar with this inscription: ‘To the unknown god.’”

‘Now while Paul was waiting for them at Athens, his spirit was provoked within him as he saw that the city was full of idols.’

How could this city not be full of idols? Cast out of paradise, we miserable wretches dwelt within this world, alone and forsaken, by our own doing. We wandered, even as we murdered, first brother, then friend. We murder because we desire justice; something, someone has done wrong; let us make it right; let us make it right by the blood of the wrongdoer. A murder is a sacrifice, and all sacrifices are offered to a god.

We do violence in service of many gods, in defense of family, in defense of love, in defense of nation, in defense of self. In ancient times, when men were more creative, they gave these gods names, whether Vesta or Patria, Eros or Atman. They did this because they were honest. They knew that they served idols, and as any good servant does, he addresses his masters by title.

Therefore, as Luther once said, man’s heart became a ‘factory of idols,’ of companions that man might serve, of comrades that may assist him in the barren desert of an empty world. Man had no choice but to forge such idols, for it is not good that man be alone.

Contrary to the laughable idiocy of modern intellectuals, idolatry is not the superstition of a long forgotten age, but the logical deduction of atheism. If man knows not of a supreme being above this creation to serve, he shall serve a known god within this creation, whether that be the state, or the zeitgeist, or human happiness, or power; or, among the high minded, ‘the ideal.’ These things will he serve, and sacrifices will he make to them.

For this reason ‘at Athens, Paul saw that the city was full of idols.’

Indeed we are wretches, lost and confounded. For we know neither from where we have come, nor where we were meant to go. This conviction some call nihilism, some call absurdity, but whatever it be called, it is the father of many a suicide. We, as children with no father, wander in the absurd, seeking a happiness never to be found, for we have rejected the source of joy; putting in its place the false gods of worldly satisfaction.

‘The city was full of idols’, and who can blame them? This sorrowful race; forlorn and downcast. To what could they turn to make a life of heartbroken meaninglessness into joy?

These philosophers are not entirely wrong. They are only wrong in that they pluralize the noun. This weak Paul indeed does preach a foreign divinity. And foreign the Lord God is to broken humanity, for humanity estranged itself from the Almighty long ago.

Ultimately, this is the meaning of the Fall: that the one true God has become to us a foreign divinity. And all the petty created things of this world have become a city full of idols.

These philosophers, these lovers of wisdom, want to hear of this foreign divinity. And so St. Paul tells them.

‘Men of Athens, I perceive that in every way you are very religious.’

And St. Paul is not wrong, for what do sinful men, even sinful philosophers do, but worship, even if only idols of imagination?

Yet Paul continues: ‘As I passed along and observed the objects of your worship, I found also an altar with this inscription: “To the unknown god.”’

Now many misunderstand this, believing that St. Paul’s reference to the unknown god is something like our tomb to the unknown soldier; that is, a generic reference to whatever god deserves honor that people have, for whatever reason, forgotten to honor. This is not what is meant.

For pagans of every nation worship not the highest gods of their pantheons, not the first gods, but the lowest, for the lowest, being closest to the earth, are most relatable; most able to help. The unknown god is that God so high, so ancient, so infinite, that He can neither hear nor be heard. Or so sinful men thought.

Yet Paul, who is the weakest, proclaims to this greatest of nations the revelation of the ineffable, the infinite, the first and only true God; what the Old Testament called the King of Kings and the God above all gods.

‘What therefore you worship as unknown, this I proclaim to you. The God who made the world and everything in it, being Lord of heaven and earth, does not live in temples made by man, nor is he served by human hands, as though he needed anything, since he himself gives to all mankind life and breath and everything. And he made from one man every nation of mankind to live on all the face of the earth, having determined allotted periods and the boundaries of their dwelling place, that they should seek God, and perhaps feel their way toward him and find him. Yet he is actually not far from each one of us.’

‘It is not good that man be alone.’

Therefore, the Lord spoke to us:

‘I will not leave you as orphans; I will come to you.’