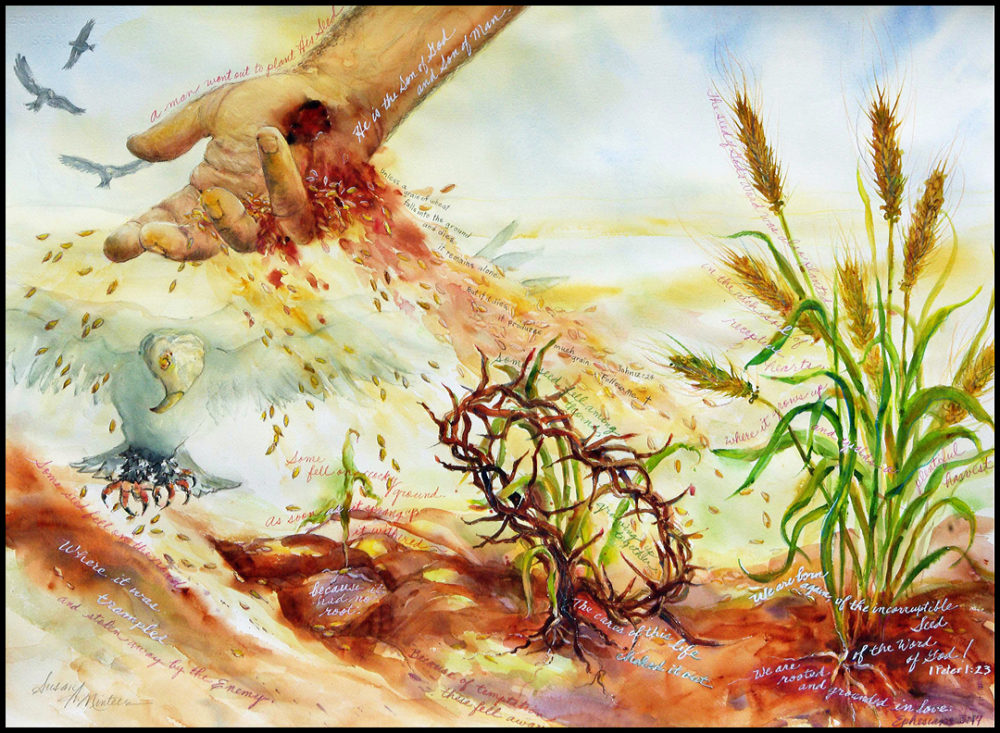 Sermon for the Sixth Sunday after Pentecost

‘For as the rain and snow come down from heaven, and do not return to there, but water the earth, so shall my word go out from my mouth.’

Our Lord affords us a rare gift. Not only does He tell us a parable, but He explains it as well, that seeing, we may perceive, and hearing, we may understand. The Lord who so often confounds mankind by His words, that He might break our pride, now speaks clearly, that we may know our need.

Christ goes out, and sits by the sea, His back to the water, and His face toward all, that the great crowd gathered about him might hear Him face to face.

I will not go on at length explaining what Our Lord teaches, for He Himself makes it clear, as it pertains to fallen man. God sows His word, the Gospel of His Kingdom, among all the peoples and nations of the earth.

Even as the pavement of a well beaten road is hard, so the hearts of many are hard, and ever hardened. The word falls on such dust, and finds no depth in which to grow. It cannot sink into the ground, so it remains above it, there to be snatched away by the evil one, the devil, whose cunning makes the minds of curious men dull, and the hearts of thoughtful men rude. These cannot receive the word, for pride, the greatest sin, prevents them from hearing the simple word of redemption, for first they have no patience for simplicity, finding their glory in complexity, and second having no time for redemption, knowing that to admit to needing redemption requires a confession of guilt. Such learned, intelligent men know of no guilt, for there is nothing they have done that they cannot explain away, that they cannot rationalize. Therefore, ‘the evil one comes and snatches away what has been sown in his heart,’ and rightfully so.

As some ground is filled with rocks, lacking enough soil to grow, so do some hearts feel a deep lacking in themselves. These are those who search endlessly for whatever it is that will make them happy. They are not picky; far from it. They will take anything; anything, at least, that promises earthly bliss. These pick up the Gospel of the Kingdom as they pick up a new hobby. They are enthusiastic, as many are when they learn a new game. They play it out, enjoy it, reveling in it day by day, even as many come to the Church, learning of its ceremony, curious about its obscure teachings, delving into its music and poetry, its art and prose. Yet let suffering come, and see it drive away all such interest and delight, and with it, all faith. Even as the sun scorches the sprout, so does persecution, unpleasantness, worldly tragedy, public criticism, personal rejection destroy the faith of these who only believe because they needed to believe, not because they knew that, before needing to believe, they needed to be saved. Many, as these, leave the Church, both her great cathedrals and simple houses made with hands, muttering such words as ‘how could God let…?’ and ‘I can’t believe in a Jesus who would.’ They shall not suffer with the suffering servant, therefore they shall not be served by Him Who suffered.

Others are as the ground choked by thorns. Even as the thorn and the weed do not destroy what is sown over it, they prohibit it from ever prospering. The seed sown in untilled wild land may grow, but is stunted, never producing its fruit. So many, if not most, have had the word sown upon their hearts since youth. All their days they call themselves ‘Christian’. Their house they ornament with crosses and Bible verses, on this wall and that room; yet time passes, decade upon decade; they grow up, marry and are given in marriage, are fruitful and multiply, and by the sweat of their brow, they make bread. And as all these things happen, their faith is not quite destroyed. Rather, it fades away, beneath the shadow of ‘real life’, of the concerns of house and home, spouse and children, work and retirement. All that is left of it is the cross on the wall, and the verse in the drawing room.

Finally, there is the good ground, that which is empty, that has no pride, whose spirit is well tilled, which is to say, well broken, the soul that accepts the word fully, and hides it deep within itself, for it has nothing else to hold on to. Upon this heart the rain and snow come down from heaven, and do not return there, but water the earth, making it bring forth and sprout, giving seed to the sower and bread to the eater, that accomplishes that which the Lord purposes, and succeeds in the thing for which it was sent. This is the heart which in faith brings forth a great tree, and blossoms unto everlasting life.

Have you never heard the teaching of the Church, and in derision, rejected it, citing your own enlightenment and education, your own skepticism, your own secret knowledge as grounds for dismissing such old and backwards stories?

Have you never left the Lord’s Day, invigorated by the song and hymnody, the blaring of the organ and the, hopefully, decent preaching of your pastor, only to speak to a not-so-pious friend or relative, who belittles your faith, causing you to make apologies for it. To distance yourself from ‘that kind of church’ or ‘that kind of Christian’?

Has your mind ever wandered, perhaps as it wanders even now, during the boring blather coming from your priest’s mouth, thinking of more ‘practical’ things: where to eat? When to take time off? Where to go? Whether or not to take the kids?

And yet, from time to time, the word you receive builds for itself a fortress within your heart, and no amount of accusation or scorn can drive it from its bulwark, whether such hatred or scoffing come from one man,  or thirty, or sixty, or a hundred.

Man is a microcosm, which is to say, he is a world unto himself; and you, O man, are all these soils, all these earths, all at once. ‘Watch, therefore.’

The Lord has come to save the world, to save man, the microcosm, the world within the world.

Now the Father has sown the Word made Flesh into this dying land, this mortal universe. As He is born of Mary, He is greeted by Magi and shepherds, who have spent their ages gazing into the heavens, awaiting a deliverer, whether they be surrounded by the wisdom of their books, or the bleating of their sheep.

Yet as the Word made Flesh, the ever blessed Son, grows and preaches unto the peoples, many hear Him, many even come out to listen, some even follow for a time, even a great crowd. Yet these, though they hear with interest, take not up the cross; they ask to return to their field, or to bury their father, for they are overcome by the worries of the world. These, who will not hate their father or mother, are not worthy of the son. Yet still, the Word speaks to them.

Then twelve follow the Christ, hearing His every Word, in joy and ecstasy, yet Peter, chief among them, when taunted by a little girl, ‘This fellow was with Jesus of Nazareth’ cries out ‘I do not know the man!’ For they are choked by a crown of thorns that shall adorn the head of the man they deny.

Finally, the Word is sown upon the stone pavement, there to be scourged upon its brick and mortar, that the Word’s blood may glisten in the morning sun. Then He is made to carry His cross of wood up the via dolorosa, the Way of Suffering, to be lifted up, above the earth, above the soil, to be devoured by birds, which are but the evil one, who seeks to snatch away what has been sown into this sinful world.
Yet this, the thorn of His crown, shall come up as the cypress, and the brier as the myrtle. For unless a seed sown into the earth die, it remains alone, but if it dies, it bears much fruit. And by His death, eternal life has been sown, to the Jew and to the Gentile, to the Magi and shepherd, to the fallen disciple and the faithful martyr, to the simple Christian and the learned theologian. Within the hearts of these shall the seed of the Word, watered with His blood, grow up unto salvation; man, the microcosm of the world, made whole by the Sower who went out to sow.

The glorification of the work of God in the completion of heart of man.

‘And all the trees of the fields shall clap their hands.’