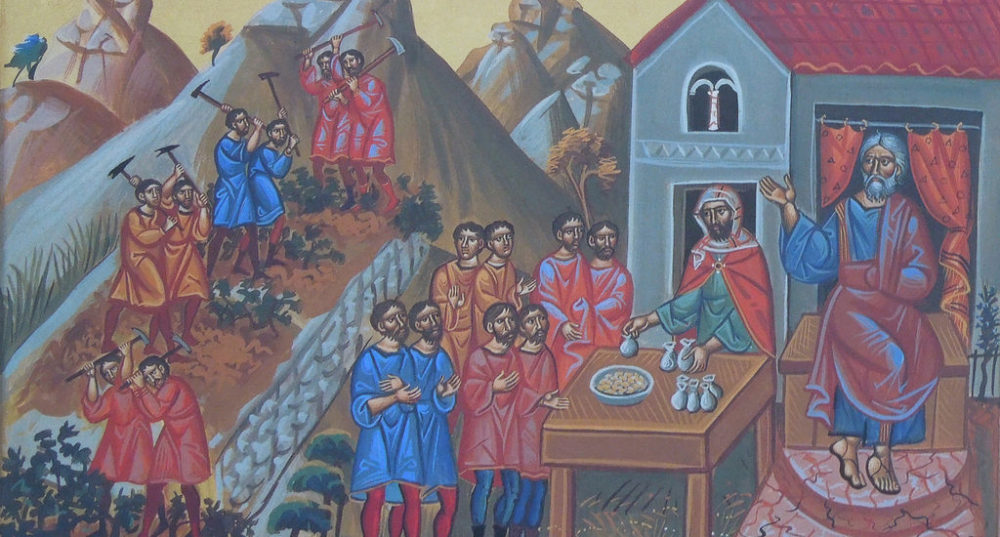 Sermon for the Sixteenth Sunday after Pentecost

Grace, mercy, and peace to you from God our Father and from our Lord and Savior Jesus Christ. Amen.

The parables of grace give us a wonderful picture of a King whose ways are NOT our ways. We find in them a kingdom full of surprises where foolish sinners are received with open arms, where the downtrodden are raised up at great personal expense to the King, and where those with the greatest debt receive the greatest forgiveness.

We hear of a foolish son who returns home after squandering his inheritance only to receive the warm embrace of his Father’s loving and forgiving arms (Luke 15:20); We hear of a dying man who is raised up from the ditch by a Savior who goes all out and gives everything he has to save him (Luke 10:34); We hear of a man whose enormous debt is suddenly erased by the grace and generosity of a King moved by compassion to have mercy (Matt 18:27).

Nothing in this kingdom goes the way we think it should. And in today’s parable, Jesus treats us to another glimpse of this strange realm where the gifts are not only unexpected, but are in fact given for everybody.

Jesus says, “The Kingdom of heaven is like a Master who goes out gathering people into His vineyard (Matt 20:1-16).” And the first thing we notice is that He wants all people – everybody He can get His hands on, right? He wants everybody in and nobody out.

He goes out first thing in the morning, calling people to Himself and giving them a purpose, having good use of them to do whatever needs to be done in His vineyard. Some will pick, some will hoe, some will prune; perhaps some will pull carts while others will haul water… Whichever the case, everyone has a vocation – there is plenty of work for everybody.

And as the day goes on, the Master continues going out, over and over again, not wanting anybody to miss out on the opportunities He provides. He goes out at 9 in the morning, again at noon and again at 3:00, all the while calling people to Himself and promising to give them “what is right” – “what is just” – or literally, in the words of the Greek, what is “righteous” at the end of the day (Matt 20:4).

And if you’ll notice, He never gives up – He never stops calling – He even goes out at the 11th hour, when all that’s left are the last and the least (Capon – Parables of Grace) – the sick and disabled, the hopeless and helpless – the people the world has long since passed over and no longer has any use for.

He says, “Come to Me… there’s a place for you in my vineyard!” And just like that, they’re all in – they have a place to go and work to do – a meaning and purpose and a promise that at the end of the day He will do right by them as well.

And then it just gets better, for the next thing you know, the Master is calling those who were hired last and emptying Himself on them – opening His lavish grace on them as one after the other these 11th hour workers receive what the Master considers “right” – HIS Righteousness – His grace that extends far beyond their wildest expectations. Here, these weak and helpless losers who could be nothing but given to – who had brought nothing to the table and had come only in response to the call – were now receiving the full benefits of the Kingdom – the full wages and perks offered by the Master to everyone who had heard His call and come into His vineyard.

And for people like that who despise the gifts; who think the Master’s ways should be their ways; who think their contributions are worth more than their neighbor’s – For anybody who refuses to get behind the Master’s grace and generosity, the Master says “take a hike. Leave.” And with that, there is no gift, for those things you feel you have earned or deserved are no gift at all.

And that is what the Kingdom of Heaven is like – That’s what the Church is like – It’s an upside-down and backward place where you will not be rewarded for working harder or longer than someone else; where the last are first and the first are last (Matt 20:16); where the Master comes to the workers and the pay is not based on how much you do, but only on the Master’s generosity – where the biggest losers gain the most, and where the books and accounts are settled by grace alone.

In the Kingdom of Heaven, the Master comes for YOU, calls YOU, rescues YOU, and gives YOU what’s right – His righteousness – His gifts purchased and won for you on the cross to give you life everlasting in His kingdom at the end of the day!

And that is why we rejoice and sing – Because when it comes down to it, we are ALL nothing but given to – there is no merit or worthiness in any of us. We are ALL losers and sinners and 11th hour rejects who have a place in the vineyard for one reason alone, and that is, that the Master has called us here by grace. Through your Baptism, He has called you and made you His own and given you a place to be and a purpose for being. The Master has chosen to have good use of you in His Kingdom.

As 11th hour disciples, you don’t have to compare yourselves to the people around you – After all, that’s not your job, and no good thing can come of it! You simply do the work God has put before you… Some pick and some hoe; Some raise children or care for aging parents; Some keep the wheels on and make the machines run smoothly; We all have our vocations, and whatever it is the Master has you doing, you may rejoice in the knowledge that in the end He gives you what is right– what is righteous – His Righteousness – His Body and Blood shed for you so that you will never go hungry, or apart, or alone, or worthless or un-needed or without a reason or meaning our purpose ever again.

And when that last payday comes – that LAST Day when our Lord comes again to settle accounts – you may rest assured that you WILL have what is “right” – what is righteous for you and for everybody who simply receives what the Master gives: HIS righteousness, His life, and His eternal salvation – In the Name of Jesus. Amen.