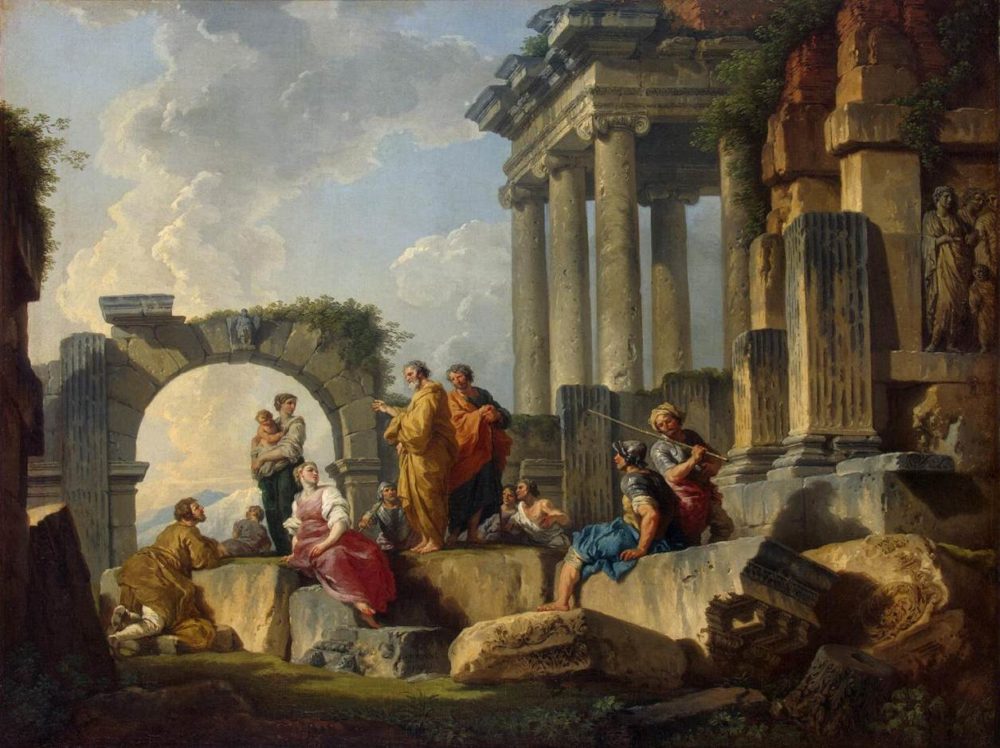 Sermon for the Second Sunday of Easter

“Now the full number of those who believed were of one heart and soul… And great grace was upon them all.” (Acts 4:32-33)

This union of believers as “one heart and soul” is a description of the Holy Christian Church from the book of Acts. It is a union brought about by a miracle of God’s “great grace” which was upon them all–the same miracle we find taking place in our Gospel reading this morning.

There, we find the account of the disciples gathered together in the upper room. They, too, were all together of one heart and soul, for they were ALL together terrified! The Jews had just crucified their Lord, and they feared they may be next. As they took shelter behind locked doors, not only were they of one heart and soul in their fear of the Jews, but they were of one heart and soul in their guilt and shame for their sins against Jesus and for their cowardice and desertion in His time of need. What we find here is a picture of sinners in a dying world, surrounded by the enemy, plagued by fear and guilt, making the best shelter they can for themselves behind locked doors…

And no, it’s not a pretty picture, especially when it hits so close to home. For this is a picture of you and me to this very day. For the world remains a hostile place. Our enemies continue to surround us. Our sins and failures continue to shame and embarrass us, and so we live in fear, seeking whatever kind of shelter we can find for ourselves. Like Adam and Eve with their flimsy leaves, and like those first disciples behind their flimsy locked doors, we seek shelter behind the delusion that we can create and sustain peace for ourselves, that we can actually cover our shame; that we can protect ourselves and evade our enemies, including our enemies of sin, death, and hell. And it is into this sad, silly, flimsy, delusion that God comes with His miracles of grace to raise us up to everlasting peace and joy in Him, even in the midst of our trials… even in the midst of our sin.

As the account of the disciples unfolds, we basically find three miracles of grace taking place. In God’s first miracle of grace, “Jesus came and stood among them” (John 20:19-31). For Christ is Risen! (He is risen indeed… Alleluia!) And now, unbounded by time, space, and the laws of matter, He reveals Himself to His disciples in the fullness of His Glory, which is to say, in the fullness of God’s visible, manifest presence among His people to save them.

In the second miracle of God’s grace, Jesus speaks His “performative Word” – that Word which DOES what it says. The same Word that spoke light into being and gave sight to the blind and literally rose the dead from their graves says, “Peace be with you.” And so it is: Sins forgiven. The warfare between God and man ended once for all. The burden lifted, the guilt removed, the price paid, the new life free from sin and death delivered by a Word: “Peace be with you.”

The third miracle of God’s grace is that gift of faith which comes by hearing this word, for immediately they are glad! In one of his sermons, Luther writes, “Herein, the fruit of the resurrection is described. Here, out of fear comes peace, out of mourning, joy, and this takes place in an extraordinary way. For it is not an earthly peace and joy. In the world, there is peace when a bad thing is removed, as when a poor person becomes rich or a sick person becomes well. But here is a different joy, for they remain locked in, and the Jews remain bitterly hostile. Everything remains the same as before – [they still have much to fear] –and yet they rejoice in this: that Christ makes them a new heart, and He gives peace and joy…” (LW 69:341-342) – Great grace was upon them all (Acts 4:33).

Soon afterward, Jesus performs these three miracles of grace yet again. For eight days later, reckoned by the world’s calendar as the following Sunday, but confessed by the Church as the Lord’s Day, the new and everlasting Day inaugurated by Christ’s death and resurrection, the disciples were gathered together again. But now they were united as one heart and soul by their confession of their risen Lord: “We have seen the Lord.” Thomas, however, had not yet heard that Word of the Lord. He had not yet stood in the presence of the Body and the wounds of Christ. And so he was not yet united with them in their confession – He was not of one heart and soul with the believers – not until God in Christ performs those same three miracles once again.

For on the 8th Day, Jesus comes to them again behind locked doors. Again, He speaks that forgiveness: “Peace be with you.” Again, He reveals His sacrificed Body and Blood, calling attention to His wounds by which we are healed. And immediately, Thomas is swept into the joy of the assembly, the body of Christ united heart and soul in their one confession of Jesus, “My Lord and my God!”

And you know the best part? Jesus is performing these same three miracles again today. For on this 8th Day which the world calls Sunday, but which WE know as the everlasting Lord’s Day of the new creation, Jesus comes for you and me! Unbounded by the laws of matter and time and space, He speaks His Word of forgiveness through the mouth of His servant. He presents His Body and blood by way of the bread and wine of His Holy Supper. And by these miracles of God’s grace, we, too, are being united through the gift of faith as one heart and soul, together in a way that transcends space and time, together today, together forever in His kingdom that has no end.

As God pours out His gracious gifts this morning, we rejoice in this wonderful reunion that is taking place – the reunion of Saints which takes place around the throne of grace every Lord’s day until He comes. For it is the reunion of God and all believers in all times and in all places, including those who have died and gone before us in the faith, which is to say, it is a blessed reunion that extends far beyond what we can perceive by our reason and senses alone. It is, in fact, a reunion we recognize only by faith – a comforting, joyful, astonishing reality that I have come to appreciate more fully only in recent weeks, especially now that I am here with you again today.

My new-found appreciation began coming to light about two weeks ago when Susan and I were attending a worship service in St. Louis. We went to the church we had attended over 30 years ago when I was a medical resident. As soon as we walked in, we were recognized and greeted by name by a man in his late 40s who was a kid back in the day when Susan and I were the youth group leaders there! Pretty soon there were others – a wonderful reunion, and the dawning of an awareness as we progressed through the service that, even though we had said goodbye to these dear saints so many years ago, we have in fact been of one heart and soul with them ever since, gathering together again that day, gathering together every Lord’s Day around the throne of grace.

This new awareness of the ongoing, unending reunion of saints grew deeper as I remembered worshipping the previous weekend in Lake City with Paul, Marie, and those saints we are getting to know in our new congregation. Shortly before that we had worshipped in Alta with Chris and Michelle and our grandchildren. Then, only days after the service in St. Louis, we found ourselves reuniting with old friends and faculty at worship in the Seminary chapel in Ft. Wayne.

And now, today, I find myself joyfully reunited as one heart and one soul with you who are as dear to me as my own family, because you are my family – you are my brothers and sisters in Christ whom I have known and loved and served with for many years – a communion of saints united once again around the wounds of Christ in a way that neither time nor distance nor even hell and the devil himself can ever prevent.

The circumstances of my departure from Christ Lutheran were pretty sad. As many of you know, I came down with COVID just days before Christmas, and I never got to preach again before we left. Susan and I never got to say goodbye. The whole ordeal was heartbreaking and bewildering and strange, and I’ve spent some time wondering what God had in mind by doing all of this…

But I think I’ve found the answer: As I began pondering all these reunions, these “communions” with Saints we have known from around the country all these years, perhaps Jesus was teaching us this: That in Him, there IS no goodbye… not to those saints we have known and served in the past, not to you, not even to my father and all those saints who have departed this life before us.

There IS no goodbye, because Jesus never says “goodbye.” He never leaves us (John 14:18), but comes to us and remains with us always (Matt 28:20), revealing Himself to us, speaking to us, giving Himself for us, forgiving us, and yes, uniting us with Him and with one another – one body – one heart and soul.For where Jesus is, there is the Body – the Church. Where Jesus is, I am, and you are, and all the Baptized who have gone before us in the faith, and all who will come after – a blessed, everlasting communion of saints, together today, together forever… by the grace of God.