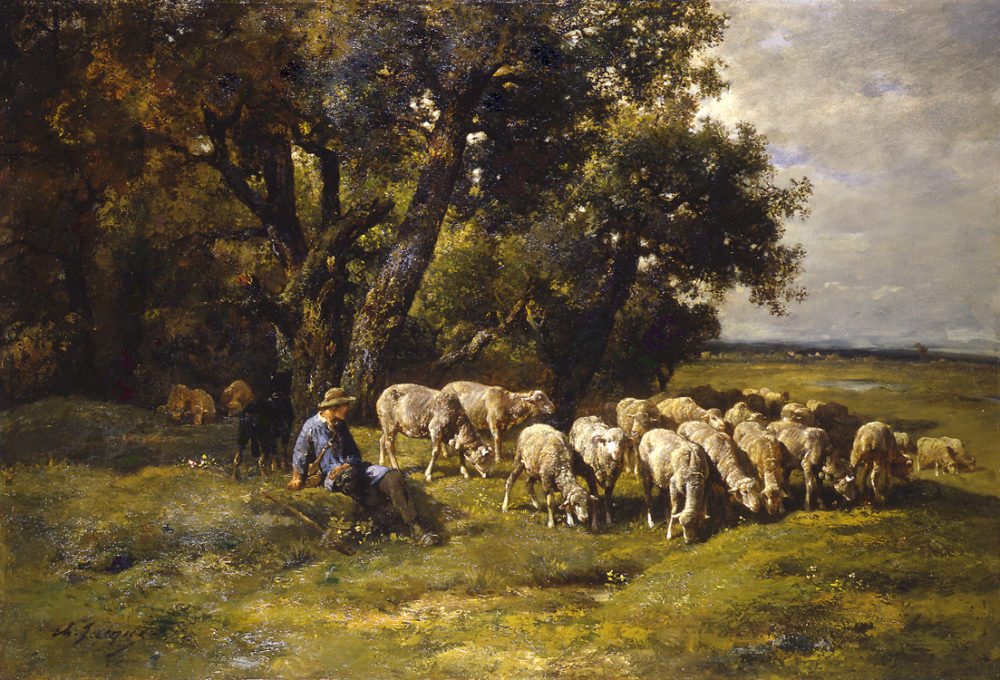 ‘This charge I have received from my Father.’

‘He who is a hired hand, and not a shepherd, who does not own the sheep, when he sees the wolf coming, flees.’

Did we not bear witness to this during that Week we call Holy? A wolf among sheep is nothing but death among the helpless, and we who are of simple and frail faith are as a man without help. We look to the ministrations of God’s chosen servants for fortitude in the face of death, and yet if they too do not possess the rod and the staff of the good shepherd. If they bear not His true authority and are not fortified by His blessed sacrifice and resurrection, they are not shepherds at all, but hirelings, for they care not for the things that the shepherd cares for.

So it was that when death breathed dark threats before the face of the disciples, they, who knowing nothing of the true nature of their Lord, and caring for the things of this world, as opposed to the kingdom that is not of this world; even they, though so gently guided by the Christ; even they fled from before the soldiers, and renounced His name before the masses. And it had to be so, for it is written: ‘Strike the shepherd, and the sheep will scatter.’

But this is not to be faulted to the Holy Disciples, for their hour had not yet come.

To die for the sin of the world; to lay down His life for the fulfillment of the Gospel; to pierce hell with the sword of the Spirit, and so free those taken as captives in the prison house of Sheol; The Lord, and the Lord alone pronounces: ‘This charge I have received from my Father.’ Him, Him alone, and no other, for behold the Lord, your God, is One.

There is but one Good Shepherd; and it is Him who lays down His life for His friends. Him who goes before the wolf of death, that He may be devoured by it; that the sheep may scatter, and their lives be spared.

It is not a life at all, but merely a prolonged death. A wandering for forty years in the wilderness, only to die of starvation and age before entering the promised land. Indeed, if Christ is not risen from the dead, our faith is vanity.

And yet, Him who descends, also ascends. Him who dies, also arises. Him who is vanquished upon the cross, also conquers the heart of hell, and desecrates the throne of Satan. The Good Shepherd does not die. He only departs for a time, leaving the ninety nine in order to search for the lost sheep, our father Adam, that in fulfilling His promise to him, it may be granted to all his children ever since.

Now He is arisen, and the Good Shepherd, having shattered the jaw of the wolf, even as He seemed to be consumed, brings in His train the Original Sinner from the realms of death, that all we who share in the Original Sin might partake in the Shepherd’s final forgiveness, that our first father, and all his children might be reunited in the flesh and spirit of the Divine Son. That the ninety nine and the one may be brought together, that the whole number of man might find salvation in the Christ, for there is salvation in no one else, for there is no other name under heaven given among men by which we must be saved.

For this reason, that we might have this salvation through His resurrection, our Shepherd lays down his life, that he might take it up again.

Therefore it is written: ‘He restoreth my soul.’

Now the wolf, that is, mortality, has been broken, Satan shackled, and hell sacked, that we might know joy, and live in quietness and peace, singing that ‘though I walk through the valley of the shadow of death, I shall fear no evil: for thou art with me.’

Even in the midst of these great enemies, sin, death, and the devil, our Lord prepares a table before us. An eternal feast; therefore, let us rejoice and be glad, for we shall not want.

Now, there is somewhat of an exegetical myth, that when an ancient shepherd found a lost sheep, he would breaks its legs, so that it would not struggle as he took it back to the flock. I do not know on what historical evidence this is based, and perhaps historically it is true. But as it pertains to the one flock of the Church of the one shepherd, it is meaningless, for we are all cripples, unable to approach the throne of God apart from the aid of another, helpless and weak; awaiting to be born upon the shoulders of our Good Shepherd into the bliss of the green pastures.

Each man must work out his salvation with fear and trembling. But this much I hope to say, it may be known to all of you, and to all the people, that by the name of Jesus Christ of Nazareth, whom God raised from the dead,

‘By him, this man is standing before you.’