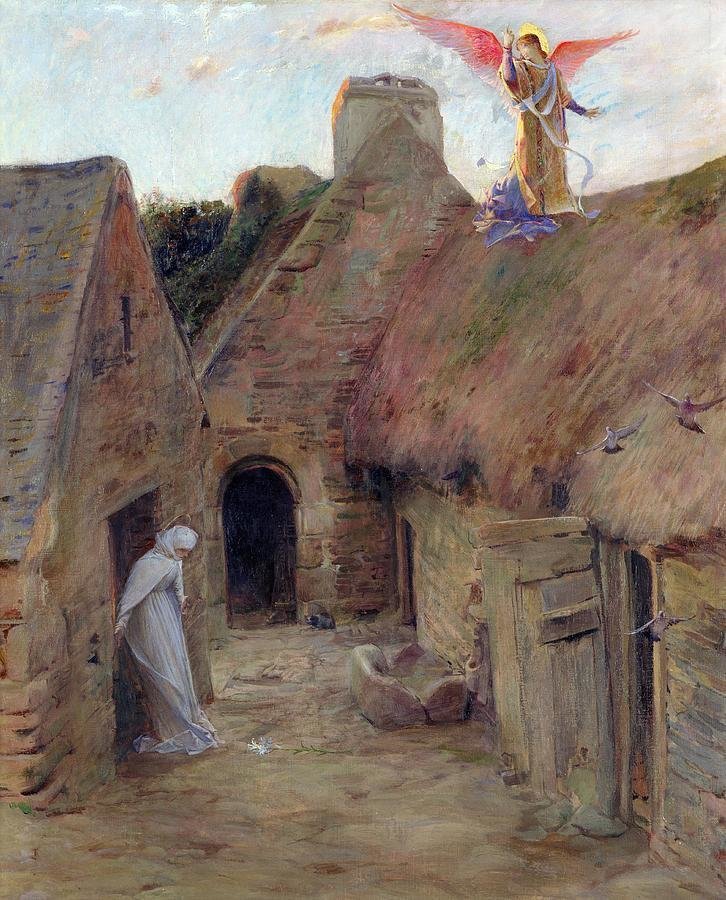 Sermon for the Fourth Sunday in Advent

‘Greetings, O favored one, the Lord is with you.’

The angel Gabriel was sent from God to a city of Galilee named Nazareth, for it was given to him by God to declare the consummation of all human longing to young girl.

For Mary, whom we call blessed, was nothing but a young girl, no older than fourteen; no richer than a commoner, of no fame, of no name, of no honor. A young girl.

How could it have been otherwise? That God would complete the salvation of the world through an unknown virgin?

Did He not from the beginning choose Abraham, a wandering nomad to be the Father of His chosen people? Pharaoh’s and kings and god-emperors He sneered at, but a nomad, lost in the land, him the Lord chose, that His children may be as numerous as the sands on the shore and the stars of the sky.

Did He not save the nations through Joseph, the least of the sons of Jacob? The youngest, the least favored of children. Yet by him, in the will of God, would hundreds of thousands be spared in Egypt from starvation. Through him would his brothers be brought not only through suffering, but to repentance, having been spared the famine of Egypt, then to be spared the famine of their souls.

And the Law, that word most true and holy, good, and wise, was not given by a priest of Israel, but by a heretic prince of the heathen nation of Egypt, who having murdered his own countrymen, became an exile from his own land. And in his exile, the Lord spoke to him from a bush set aflame; that He might no longer be a prince of Egypt, but the revelation of the Word embodied.

And there, in the ruination of the Nile, and in the desert of Sinai, the Lord chose the least of nations, to be His own people, to guide them to a land flowing with milk and honey. That He may be their God, and them His people.

Now a peasant shepherd, a boy named David, is chosen to kill the warlord Goliath, and in this victory, be made king of Israel. This shepherd king declares ‘See now, I dwell in a house of cedar, but the ark of God dwells in a tent.’ For though a palace had been built for David of strong wood, yet the throne of God remained in the tabernacle, built of poles and cloth, a tent of wandering for the God who has made the king of Israel to dwell securely in the land. It is the will of David to build for God a temple, a true house of meeting.

The Lord neither approves nor disapproves. For the Lord is always on the move. On the move to save His people from their iniquity.

The Lord neither approves nor disapproves, but says, ‘I will make for you a great name, like the name of the great ones of the earth. And your house and your kingdom shall be made sure forever before me. Your throne shall be established forevermore.’

The Almighty shall remain a wanderer in the land, that His people might have a home.

Now an angel of the Lord comes to an impoverished daughter of David, the virgin Mary, to declare to her that she shall conceive in her womb and bear a son, who shall be great and will be called the Son of the Most High.’

How could it have been otherwise? It is the way of the Lord to scatter the proud in the imagination of their hearts, and to exalt the lowly. Now then, He shall exalt the lowliest of all. She whom all generations shall call blessed.

She says quietly ‘How will this be, since I am a virgin?’

‘And the angel answered her, “The Holy Spirit will come upon you, and the power of the Most High will overshadow you.’

She shall bear a Son, the only begotten of the Father, and all the days of His life, He shall wander the land, for foxes have their dens, and birds their nests, but the Son of Man has no place to rest lay His head. He must wander. He must battle with demons. He must heal the sick and chastise the self-righteous. He must forgive the broken, and bind the nations. He must wander to all those who wander, as a Good Shepherd seeks out the lost sheep. He wanders that He might find we who wander, that we might be brought home.

For the Lord is always on the move. On the move to save His people from their iniquity. He is a wanderer in the land, that His people might have a home.

And He comes then to you, most unworthy of all, sinful child, who, though bearing the name ‘Christian’, is unworthy of the title. He comes to you, and declares that you too shall be of His eternal people, His everlasting kingdom, His holy priesthood. You, the greatest of sinners, and the least of the nations. To you, our Lord, entering this wasteland from heaven above, wandering this desert, in the manger sheltering His infant form, in the tent hiding His Eucharistic body, to you He comes, and declares, ‘Greetings, O favored one, the Lord is with you.’

You may ask of God, ‘How will this be?’ That the Lord should save one as miserable, as lowly, as idolatrous as me?

But remember, ‘The Lord exalts the lowly.’

‘The Holy Spirit will come upon you, and the power of the Most High will overshadow you.’ By the unmerited grace of God shall you be made His own, in His empire. A prince of the great King.

Be not clever. Think not too hard. Devise not many plans to earn the gift given in the incarnation of your deliverance. Speak simply, as the blessed Virgin speaks:

‘Behold, I am the servant of the Lord; let it be to me according to your word.’