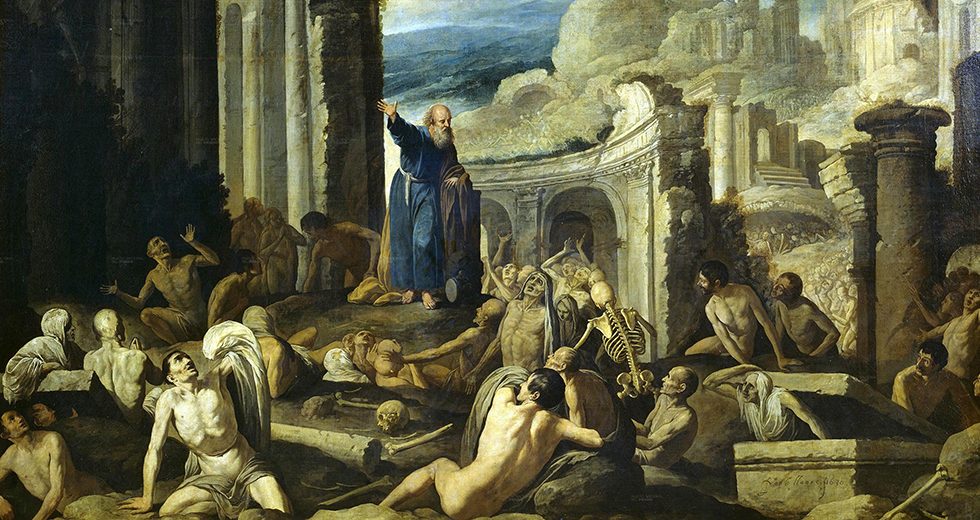 Sermon for the Feast of Pentecost

‘So I prophesied as he commanded me, and the breath came into them, and they lived and stood on their feet, an exceedingly great army.’

The Scriptures speak by the word of their breath, flowing from every faithful Christian and priest, that the Spirit hovered over the waters in the beginning. There it hovered, and by it were created all things, lands and waters and firmaments and living beings. By the Spirit spoken by the Lord were all things made.

St. Ezekiel sees a vision. A valley of dead and decayed men lay before him. And he is told to speak over them; to prophesy the Word of the Lord. And behold, they arise. These slain, they arise. I tell you, they are not merely dead, but killed. But this is of no matter, for all men are killed, whether it be by soldier or murderer, by disease or time.

All death is murder by the hands of Satan, a hellish deed, enacted upon all men, generation upon generation.

And yet, by the breath of God, they may live. For man does not live by bread alone, but by every word that flows from the mouth of God.

The Prophet sees something simple; that nothing, neither death nor hell nor the devil can resist the utterance of the Almighty. For ‘He sends out his word, and melts the icy blast.’ ‘The mountains quake before him; the hills melt; the earth heaves; and all the world who dwells in it.’ ‘But the Word of the Lord endures forever.’

For the Lord wages a great war against all who oppose mankind, His beloved creation. And we, with Him, the God of Man, all the faithful, war with Him against this tragic world. And for this reason, we who are called these slain, for we who are of Life, that is, of the Christ, do not merely succumb to death, but fall to death, the last enemy.

But again, it is of no matter, for the Word of the Lord is prophesied over us, for it is written, ‘though they die, yet shall they live.’

For ‘it shall come to pass that everyone who calls upon the name of the Lord shall be saved.’

‘Do you believe this?’

The day of Pentecost arrived. And the Apostles were gathered together. A great breath, rushed before them, as from heaven a sound like a mighty rushing wind. Tongues of fire dwelt over them; and that Fire that dwelt over them was the Spirit, and Life; and to them, it gave speech, even as it gave it to Adam; that Adam may know the Word of the Lord.

They spoke to many, in their own language, be they Parthians or Medes or Elamites; Mesopotamians, Judeans, or Egyptians. They spoke the Lord’s Word, which is Christ. To these pagan nations, Christ hovered over them, for He would recreate them in His image. He would give them Life.

The Gospel was preached to them. To the gentile nations, those who did not inherit the promise was the Gospel preached to. And in this sacred house, it is proven that many believed.

Yet our inheritance is one of enmity, for we receive the mortal war against sin, Satan, and the unbelieving world.

But it is of no matter. For we are an exceedingly great army. And though it was spoken in spite, we do indeed drink new wine. For our victory is fated, and so we rejoice forevermore. A prophet greater than Moses comes to the no-man’s-land of this life. Be you sick or wretched or dead. It is of no matter. For the Word Himself, [Jesus the Christ] has come. Pray then, to the Word, [to the Spirit] a simple prayer; the prayer of a long passed prophet:

‘Breath on these slain.’