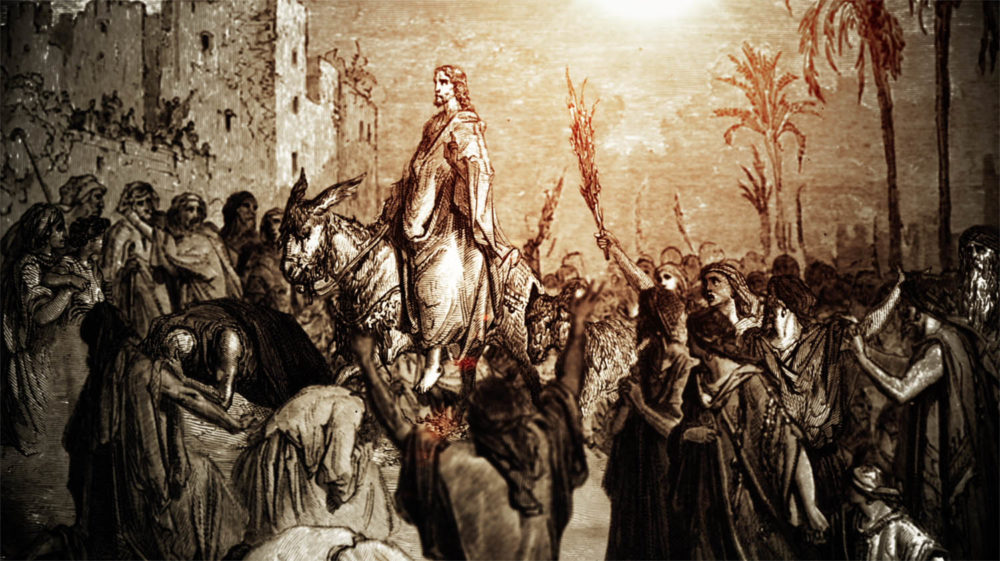 Sermon for the Feast of Palm Sunday

‘Behold, your king is coming to you, righteous, and having salvation.’

The king has come. To this lawless and sinful world, He has returned; for no longer could he suffer to see it lost and forsaken. The king has come to deliver us from our sin.

He enters the Holy City, eternal Jerusalem, riding upon a colt. Branches of palm are laid before Him to trod upon, for a palm is a tree that grows in desolate places. Now the Lord shall trod upon all desolation, and make of such desert lands a verdant garden. For He has come to restore Eden.

Heathen kings entered in triumph into cities, with long trains behind them; trains of treasure, and of armies, and of slaves.

Yet the king enters Jerusalem with no treasure, for it is written: ‘Blessed are the poor.’

He enters with no army, for it is written ‘Blessed are the peace makers.’

He enters with no slaves, for the Lord of Salvation has come not to be served, but to serve. He has come not to make mankind submit to His lordship, but to liberate all mankind from their ancient slavery. He is the truth. He has come to abolish all servitude, and to make of humanity a holy priesthood, for it is written, ‘The truth shall set you free.’

He rides through the pylons and sacred pillars of Jerusalem, the city who kills the prophets and stones those sent to her.

‘How often would I have gathered your children together as a hen gathers her brood under her wings, and you would not.’

For truly the Holy City is nothing but a godless Babylon. For millennia God had sent prophets and rulers and judges to this city, that it may repent; but the drawing of blood was their only reward.

They whored after pagan gods, idols of wood and stone. Created things that promised them not forgiveness, but property and prosperity and happiness. They despised the maker of all, for the maker of all would not indulge their sensual desires, for the Lord desired a people who ruled over their passions, not one ruled by their lusts.

Yet Jerusalem, and all mankind with them would not have this, for we knew nothing but the satisfaction of momentary wants. We committed sin upon sin, for this is what we wanted. We worshiped idol upon idol, for they promised the gratification of our thirst. And we despised the God of righteousness, for he asked but a simple request: that in enjoying creation, we should also enjoy the Creator.

But this we despised, for we in our conceit believed that we caused our own blessing; we made our own good; we forged our own happiness. What need is there of this God that asks for our gratitude? He cannot save us. For he cannot save himself.’

His fate cannot be altered, for the unrighteous shall never tolerate the righteous. And his fate is known. He himself confesses it. He knows that this godless world will save nothing for him but the desire of Cain, to murder a better sacrifice. Christ himself speaks it: ‘The hour has come for the Son of Man to be glorified. Unless a grain of wheat falls into the earth and dies, it remains alone.’

The king must fall into the earth; he must die; for only by his death shall he gain his Church, his Bride, and no longer be alone.

And the wicked, we who wave palm branches before him, we shall be his killers. We shall have the iniquity of his innocent blood upon us and upon our children. For we and our ancestors have been murderers and blasphemers from the beginning, and so we shall carry on, and kill one more soul, for none is more deserving of death than the one that makes all humanity seem worthy of the gallows.

We must kill him, for sinners cannot do otherwise. We slaughter one another, day after day; we steal, backbite, ridicule, complain, we murder others reputation when we are too shy to murder their flesh. We are in the world, and we are of it. In our hypocrisy, we welcome the Lord into our whoring heart with branches and praise, that there we may tear him apart.

You may say that you would never do this. But you have already done it. Indeed, in five days, you shall take up the scourge and hammer, and nail this man to a tree, that he may bleed the blood you drink; that he might suffer the hell you deserve.

Do you think you have any reason to hope? You, who will murder the Lord of all? For the Lord is not simply a man, but God, and hell shall not rapture him. The Lord, my King, shall return. And who knows whether he will not turn and relent, and leave a blessing behind him?

Who knows if he will forgives his traitors, or if in his justice, he will cast us into the outer darkness? The eternal fire?

Now he enters the city, eternal Jerusalem, the Babylon of our hearts. He enters into his Passion, into his death at the hands of an unclean people. And by the words of his mouth, he speaks:

‘Now is the judgment of the world.’