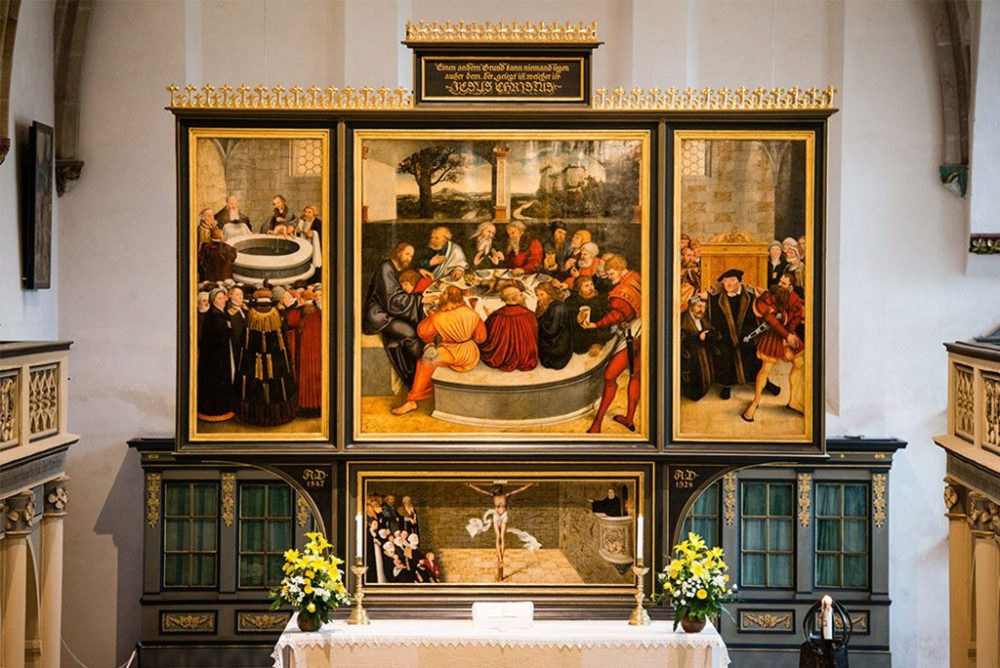 New artwork has been installed in the Narthex at Christ Lutheran Church. Of course, if you have made the pilgrimage to St. Mary’s Church in Wittenberg, Germany, you have no doubt seen this magnificent Reformation Altarpiece. Painted by Lucas Cranach the Elder, it stands as vivid testimony that the Church of the Reformation bears the marks of the Church catholic, resting on Christ alone by grace alone through faith alone, which we receive by Word (the Scriptures) and Sacraments alone.

The paintings not only proclaim the marks of the Church by their depictions of Baptism, the Lord’s Supper, and Confession and Absolution, but prominently display the central figures of the Reformation participating in these gifts.

The left panel shows Philip Melanchthon (author of the Augsburg Confession) performing a Baptism. In the right panel, Johannes Bugenhagen (Luther’s pastor at St. Mary’s) bears the Office of the Keys, binding the sins of the man on his left, losing those of the man on his right. In the large center panel, Luther is shown at the Lord’s Supper with the Apostles, offering the chalice to Cranach himself. (Judas, with moneybag by his side and his foot already outside the circle, is shown breaking away from the communion.)

The foundational panel depicts Christ crucified as the central figure upon which the Church of the Reformation rests. Luther is shown in the pulpit with one hand resting on the Scriptures, the other pointing to Jesus. Cranach, along with Luther’s wife and son, are among the congregation.

Above the entire work hangs a panel with the words of 1 Corinthians 3:11, “For no one can lay a foundation other than that which is laid, which is Jesus Christ.” Indeed, Christ crucified and risen for the life of the world is the eternal Gospel which this masterpiece proclaims to every nation and tribe and language and people.

Pastor Fields, Sister Sara, and Pastor Holowach are pleased to donate a reproduction of this Wittenberg Altarpiece to the saints at Christ Lutheran Church on the occasion of the 500th Anniversary of the Reformation, October 31st, 2017. Soli Deo Gloria.