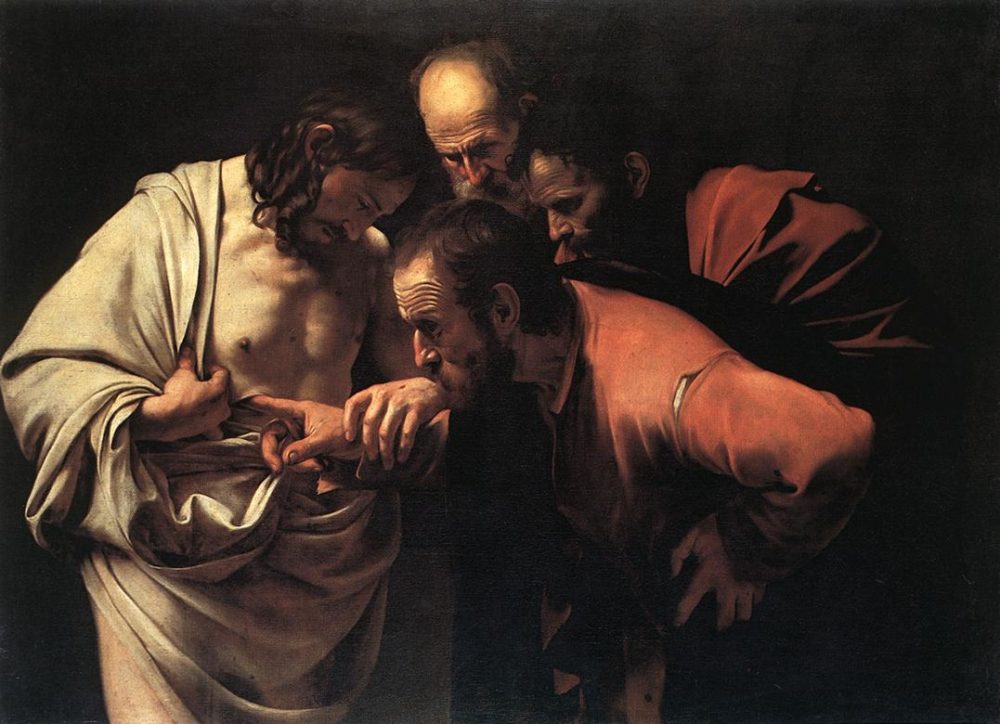 Sermon for the Second Sunday of Easter

Therefore it is written: “I am the Alpha and the Omega.”

My God has come to you thousands of times in the past, O people. And what has He asked? To give you everything, and to have you confess but one truth. A truth, and not a command. A truth: that He is the Lord.

For it is written: ‘I will smite with the rod that is in my hand the waters of the Nile, and it they shall be turned to blood.’ ‘That they shalt know that I am the LORD.’

It is written: ‘When you speak unto the ears of thy sons, and thy son’s sons, what things I have wrought in Egypt, and my signs which I have done among them; they may know that I am the LORD.’

And again: ‘I will pass through the land of Egypt this night, and will smite all the firstborn in the land, both man and beast, against all the gods of Egypt. I will execute Judgement. I am the LORD.’

And again: ‘I will harden Pharaoh’s heart, and I will be honoured upon Pharaoh, that the Egyptians may know that I am the LORD.’

These things my God and your God said in His wrath, for so greatly did He love His people. Know this, Christians, that there is no hatred without love, for one only hates what defiles what one loves.

For it is written: ‘I have heard the murmurings of the children of Israel; and they shall eat flesh in the wilderness, and in the morning they shall be filled with bread, and they shall know that I am the LORD.’

And it is written: ‘I have brought you out of the land of bondage, that you may be holy, for I am the LORD.’

And ‘None of thy seed shall pass through the fire of Molech’ as is the way of the heathens, ‘for such is a profanation, a desecration of my name. I am the LORD.’

And ‘I have formed the earth and made it, I have established it not in vain, but to be a home for you. I am the LORD, and there is none else.’

‘And fear not.’ ‘For I brought you out of the land of slavery, to be your God, to be possessed by you as your own. I am the LORD.’

But would you heed the goodness of the God? Or would you despise His promises? His complete giving of Himself? Would you have Him as your God? Who delivered your ancestors from slavery and gave them land and  food? Who protected them with His angels and guarded them with the dread might of His will?

We have all fallen before Molech. We have all sacrificed to the pagan gods: to success, to money, to pride. Ingratitude is our only trait, for we, who are evil know no virtue.

So it was written of our ancestors: ‘I will break down the wall that you have forged with untampered morter, and bring it down to dust, and it shall fall, and you shall be consumed, then you will know the I am the LORD.’

But will the God who loves us chastise us forever for our Sin? [He is the beginning and the end, yet will his wrath be without end?] Hear the great words of Saint Thomas, the holy.

St. Thomas is Israel. He is the Church. He is the people who, being delivered, being saved, being given everything, spat in the face of the God of his salvation.

Yet when many said that Christ had arisen, he did not believe. We call him doubting. More likely, he was fearing. [A wall was built about His heart, fearing the onslaught of a risen and wrathful God. Who shall break down this wall, formed with untampered mortar?]

It is not good news to hear that the God whom you have killed has returned. Therefore, he doubts, for the alternative is too terrifying to think of.

Our Lord comes to Thomas. And what terror struck the disciple? For the one before him is the one who once said ‘Whosoever is ashamed of the Son of Man, of Him shall the Son of Man be ashamed.’

But the Lord invites him: ‘Put your finger here, and see my hands, and put your hand in my side. Do not disbelieve, but believe.’

Thomas places his fingers in the blessed wounds of our Lord. He traces the blood of His hands. He touches the scourged ribs of His side; [the pulse of His sacred heart. And by His heart, the wall that Thomas had forged is brought down to dust.] All of the history of mankind, all the reality of God, was put before him: a God despised, a God condemned, a God cast out, a God who looks down from the untold heavens; a God who looks up from the hellish abyss. A God who has known the unfaithfulness, the sin, the iniquity, the bloodlust, the idolatry, the harlotry of His people. But a God who does not heal himself of such wrongs, such injuries, but bears them, and not just now, but forever; a God forever crucified; a God forever murdered, forevermore and forevermore ‘alpha and omega, beginning and end’, for to this God, an injury is but a wedding band.

Perhaps, when He touched the blood of our crucified Christ, St. Thomas recalled what the prophet had spoken: ‘And when I am brought up, I will bring you into the land of your ancestors’ ‘not according to your wicked and corrupt doings.’ ‘You shall take an everlasting inheritance.’ ‘And you shall know, that I am the LORD.’

St. Thomas collapses at the feet of Jesus. With weeping he waters the risen Christ’s feet. And seeing all the malice of mankind before his eyes, and his hand upon the body of Him who bears all torment, yet with only love and mercy in His sacred heart, Thomas whispers, in shame, in humility, in joy: