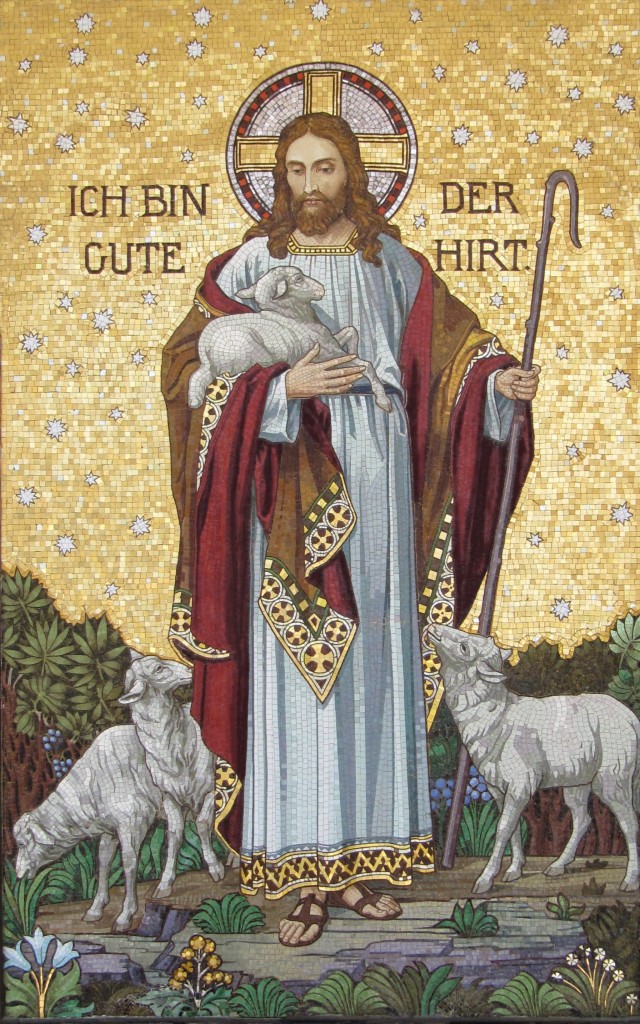 “At that time the Feast of Dedication took place at Jerusalem. It was winter…” (John 10:22)

which is to say, it is NOT a feast appointed by God to gather His people into Communion with Himself.

Rather, it is a feast appointed by the people themselves to celebrate their own victory in this world –

a military and national victory over their enemies –

a victory headed by the mighty warrior and savior Judas Maccabaeus.

After the Seleucids had taken over Judea and Antiochus Epiphanes had turned the temple into a pagan shrine and brothel around 168 B.C.,

the Maccabees rose up in revolt.

Under Judas Maccabaeus, Jerusalem was freed,

and the Jews held a big celebration as they cleansed the temple and dedicated it once again to the Lord.

They re-lit the temple lights, and have continued to celebrate this Festival of Light every year to this day –

this Feast of Dedication –

this feast we now know as Hanukkah.

It was Hanukkah, the Feast of Dedication –

And it was winter… which is to say, it was a time of darkness –

And as the Jews made this feast for themselves, doing their best to bring light to their world, who should show up but Jesus,

the True Light who had come into the world (John 1:9).

The True Light, which enlightens everyone was in the world… yet the world did not know Him.

The Jewish leaders demand to know, “If you are the Christ, tell us plainly!

And perhaps that sounds innocent enough –

I mean, don’t we ALL want to be assured that Jesus is the Christ, the Savior of promise?

Weren’t these folks, like all of us, sitting on the edge of their seats, hearts pounding with anticipation, hungry to hear once for all that their Messiah had indeed come?

NO! They were looking for a way to get rid of Jesus!

They’d had enough of this guy getting in their face, supposedly forgiving people their sins while calling them hypocrites – calling them to repentance!

Who did He think He was? They were the “good guys” –

They were “right with God” – These had no need of repentance!

And now these questions, these “taunts,” were simply one more attempt to get Jesus to utter a clear blasphemy so that they could take Him down.

In verse 31, you will discover they had stones in hand, ready to let fly…

Of course, Jesus doesn’t hold back, but answers, “I HAVE told you plainly, and YOU do not believe.

The True Light that gives life to man had come to His own, and His own people did not receive Him” (John 1:9-11) –

In fact, there is a distinct theme running through our texts today –

an ominous thread that weaves its way through every one of our readings.

trials and plots, imprisonment and afflictions;

This week, Gene Veith cited a study sponsored by the British government that found that “religious persecution around the world is taking place on a scale and intensity that few people have realized.

According to the report, ‘one third of the world’s population suffers from religious persecution in some form, with Christians being the most persecuted group.” (https://www.patheos.com/blogs/geneveith/2019/05/one-third-of-the-worlds-population-suffers-from-religious-persecution/).

From Egypt to Syria to Sri Lanka, the death tolls are approaching the level of genocide.

And in France alone, over a thousand Christian churches have been desecrated, vandalized, or burned to the ground in just the past year!

Of course, on the night when He was betrayed,

Jesus reminded His disciples about how the people had hated Him and persecuted Him for simply doing those works His Father had given Him to do.

And because the world hated Him, it would hate those who follow Him, you and me included.

Jesus concluded, “If you were of the world, the world would love you as its own,” as if to say,

“If you were ‘politically correct’ – if you said only those things people wanted to hear, you would be in good shape.

Now do you see what’s going on?

When someone asks you, “Do you honestly believe there is no other way to heaven than by faith in Christ, and that everyone else is going to hell,”

they’re not interested in learning more about the Way, the Truth, and the Life…

they’re looking for a fight!

When they ask your view on gay rights, women’s freedom to have an abortion, or a person’s right to choose their gender,

they are not concerned about the welfare of their neighbor,

but are setting you up as a shameful bigot, ready to unleash the ire of the world against you and your reputation.

In fact, these folks are no more interested in Christ for their forgiveness, life, and salvation than those guys in the temple were that night on the Feast of Dedication… Why?

Because, like them, these folks are convinced they are in good shape.

Their understanding of sin and its consequences is seriously flawed.

They are content, having surrounded themselves with a light of different kind – a light of their own making –

the light of reason or self-justification and peace with their own god on their own terms according to their own understanding.

John the Baptist proclaimed repentance for the forgiveness of sins, and he was killed.

Jesus spoke to the people of this matter in Solomon’s Colonnade that night, and He was crucified.

St. Paul, according to our first reading, “did not shrink from testifying both to Jews and Greeks of repentance toward God and of faith in our Lord Jesus Christ” (Acts 20:20-23), and he was imprisoned and eventually killed for his efforts.

So don’t be surprised when things go the way same way for you!

For when you confess Christ exclusively as the Way, the Truth, and the Life, you will be despised.

When you take your stand against the sin and idolatry of this fallen world to call people into the True Light that gives life to the world, you’re going down!

and in the eyes of this world, you will lose…

You will lose your credibility, your reputation, friendships and relationships,

perhaps even your freedom and your very life.

trials and plots, imprisonment and afflictions;

From King David to St. Paul to this very day, there are no surprises here… except for one!

And that is, that even while we were still sinners, God came into this world to save us –

That even while we were still sinners, God gave His beloved Son Jesus Christ to suffer and die for us –

That even to this day while we are still sinners, God is pouring out His forgiveness, life, and salvation for us:

Take and eat… given for you.

Take and drink… given for you.

Holy Absolution… given for you.

You have a Savior, a Shepherd, a victory, a feast –

an inheritance, an eternal life –

a garment of white and a place before the throne of God where you may drink from the Springs of Living Water.

You have washed your robes and made them white in the blood of the Lamb,

and now you stand before the throne of God even this very day – forgiven by Him, loved by Him, sheltered by Him –

No more hunger, no more thirst, no more pain or tears.

And even as you walk through this valley of the shadow of death, surrounded by the false light of a dying world, perhaps even despised and persecuted for your confession of faith and your acknowledgment of God’s Word,

you have nothing to fear.

So keep up the good fight – for your neighbor’s eternal life may depend on it!

Like St. Paul, do not shrink away from doing anything that is profitable for the life of the world around you –

And do not be afraid.

For the Lord is your Shepherd.

Indeed, as members of His flock,

goodness and mercy SHALL follow you all the days of your life,

and you SHALL dwell in the house of the LORD forever (Psalm 23).