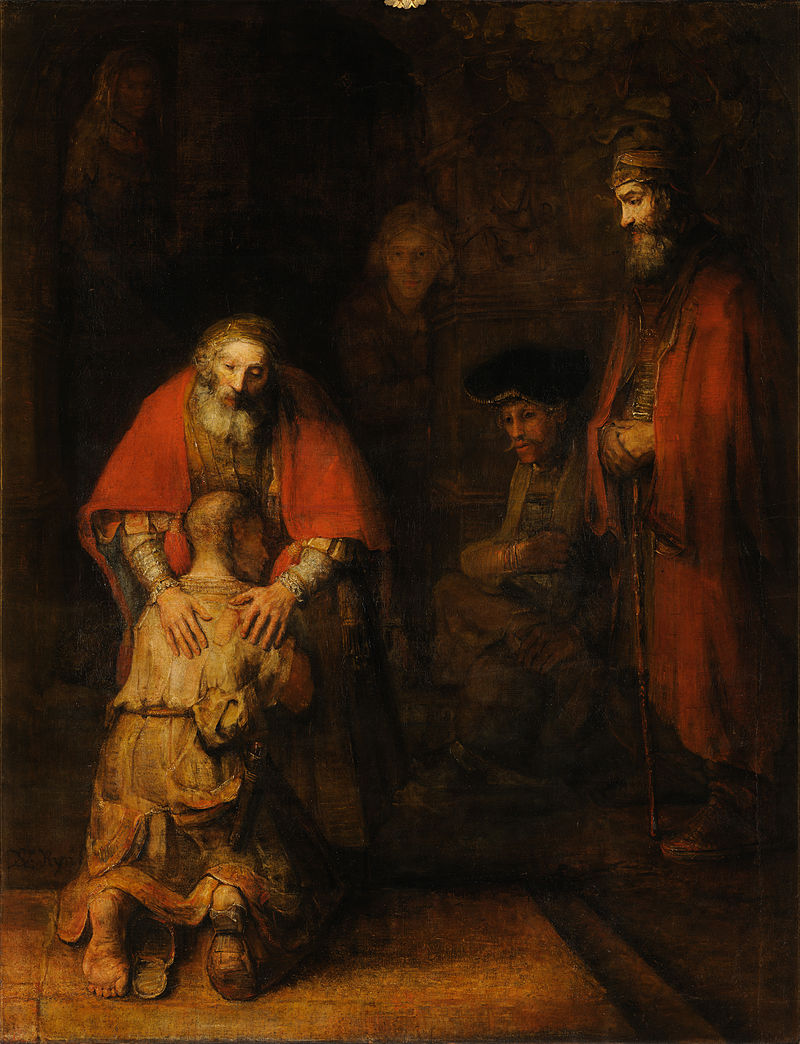 Sermon for the Fourth Sunday in Lent

“‘Father, give me the share of property that is coming to me.’”

If you were a Jew, exiled in Babylon, during the captivity of Israel, you may have heard a most strange story from your Mesopotamian masters:

In the beginning, there was Tiamat, a great dragon. Into the void she gave birth to various beasts and fantastic beings; and one of these fantastic beings was Marduk, the first and greatest human being. Marduk looked upon Tiamat’s creation with horror, seeing all the beings that she bore to be nothing but monsters. Therefore Marduk, the first of mankind, rose up, and taking a sword, split Tiamat the dragon in two. From one half, he made the heavens, and from the other, he made the earth.

Again, if you were a Jew, you would be horrified by this story, by the mere fact that a creation would rise up and kill his own creator.

But this story really is not peculiar. For nearly all ancient mythologies contain a story about the slaying of the ancient gods by other, more anthropomorphic, more human like, very human like, gods.

Man’s default religious setting is not ‘there is no God.’ Rather, it is something much closer to what the philosopher Friedrich Nietzsche once wrote: “God is dead, he remains dead, and we killed him.”

These myths are nothing but the story of the Fall of Man, but told from man’s perspective. For in all of them, man desires a world of his own design, which cannot be unless some god is first done away with. In order for man to be his own god, of his own world, he must first slay the true God of the world, and take by force his own inheritance.

Our Lord tells a parable: “There was a man who had two sons. And the younger of them said to his father, ‘Father, give me the share of property that is coming to me.’”

An inheritance, of course, comes to a son only when the father has passed away. To ask for one’s inheritance in advance is to say simply: ‘Father, you are dead to me, and I to you, so give me my inheritance, that way I can leave you forever.’ So the father gives the son his inheritance, and the foolish son leaves the house of his father, and enters into ‘a strange country.’

The son is none other than mankind, who wished to be freed from the love of God the Father. God had promised Adam, and all humanity flowing from him, an inheritance, that he would be ‘after the likeness of God.’ But Adam would not wait. Neither would he dally in impatience under the grace of God. He went to the forbidden tree, and being promised that the fruit would indeed make him ‘like God’ he took of it and ate. It is written that then his eyes were open, and like God, he knew good and evil. He had received an inheritance, though not how God had desired; and yet it did not matter. For having received what he wanted, he left God and his paradise to go to a ‘strange country,’ to a world of his own making.

Our Lord continues: ‘there, he squandered his being in reckless living.’ The Gospel text does indeed read ‘being’ or ‘essence,’ and not ‘property’ as many translations say. For it is not merely the case that he spent all his money; rather, in the process of his sinful, capricious living, he lost his being, he lost who he was, he ceased to be the son of his father.

So too we, the children of Adam, as we sojourn as our first parents did, in ‘a strange land,’ the world of our imagining, we lose who we really are. We forsake our humanity, and live like unthinking beasts. Animals, concerned only with satisfying desires: hunger, drink, pleasure. If we cannot get peacefully what our base lusts demand, we get them forcefully: we connive, we scheme, we steal, in open ways, and in insidious ways; we commit adultery, we fornicate. We gorge ourselves on food and entertainment. We are no better than dogs. We are unworthy of the name given us when God first said ‘Let us make man.’ We have ‘squandered our being in reckless living.’

The parable goes on: “And when he had spent everything, a severe famine arose in that country, and he began to be in need.”  For what is this life that humanity has made for itself but a famine? No matter how much we make, no matter how much we consume, we always want more, we are always starving, even unto death. What we hunger for is not ‘bread alone, but every word which comes from the mouth of God.’ The word of the God who we forsook, the God whose house we spat on and exiled ourselves from. No amount of earthly pleasure and consumption can save us from the starvation of our souls.

So the son ‘came to himself’ he remembers what he once was, and sees what he has become, and he is repentant. ‘I will arise and go to my father, and I will say to him, “Father, I have sinned … I am not longer worthy to be your son.” He speaks as one who has come face to face with the accusation of the Law, and the Law in this case does not take the form of a prophet’s sermon or a priest’s rebuke. Rather it takes the form of the misery of his own life. His entire existence pronounces condemnation upon his meaningless works. But his repentance is not one of trust, but one of groveling. He does not expect his father to treat him well, he has no faith in the love of his father. Rather, he hopes that his father, with some miniscule amount of mercy, will tolerate his prodigal son’s presence, and give him a job doing some menial task on the family estate. “I am unworthy to be your son. Treat me as one of your hired servants.”

But it is written: “while the son was still a long way off, his father saw him, and felt compassion, and ran and embraced him, and kissed him … and he said to his servants, ‘Bring quickly the best robe, and put it on him, and put a ring on his hand, and shoes on his feet. And bring the fattened calf and kill it, let us eat and celebrate.’”

Now let us leave the son, let us leave all mankind. And let me speak to you. Look where you find yourself. You are in the Church, in your father’s house, a world not of your own making, but of God’s making. And how did you get here? It was in repentance that you came to the Church, it was in contrition, though in great weakness, that you first darkened the doors of the sanctuary.

You, dear Christian, are the prodigal son; you wished your father dead; you were there with the jeering crowd on Good Friday, mocking our Lord, reviling him as a Messiah unworthy of your personal glory; you cried out ‘Crucify Him!’ you killed God. But then you came to this house and confessed your sin, ‘Father, I have sinned, I am not longer worthy to be your son.’ You entered into the temple of the God whom you killed within your heart; the creator of all whom you crucified; and having squandered your being in sin, you came to Christ as a beggar, to him whom you once hated.

But while your soul was still far off, in love, God through his Word came to you, embraced you, and kissed you. ‘Bring quickly the best robe!’ Receive, God said, this white garment, this burning torch, the sign of the cross, upon your forehead, and upon your heart, be clothed with the righteousness of baptism, the most beautiful and blessed of all garments. ‘And put a ring on his hand!’ For no longer are you but a servant. You are a son of the most high, bearing the ring of his name upon you, the ring of his authority and rule.

And look here. The table is set with the finest meat and the greatest wine; for it is the meat and wine of Christ’s body and blood. Is this not why you have come today? ‘Let us eat and celebrate!’

And not just now, but forevermore.

For you, O prodigal son, will one day make another journey. For though we celebrate in gladness now, yet death is still your due. For the sinful Adam within you still hates God, still desires to kill the creator, still wishes to be the maker of his own world; and this sinful Adam in your heart must be destroyed. Therefore, a final purification is needed. So you will endure ‘a severe famine’, or perhaps in this case, a penitential fast. You will lose your possessions, your pleasures. You will lose your family, your friends. You will lose your sight, your hearing, your mind, and then finally your body. All those things which sin trusted in so much within you.

And then you will see a frightening vision; the expanse of heaven and the gates of paradise, imposing, ever-high, dreadful; the Day of Judgment is before you. Burning seraphs, infinitely tall, each of their six wings enough to blot out the sun and all stars, they hover over you, singing their awesome song in praise to the Father, your judge, before whom you are presented. There too will be the countless throng of martyred dead, those saints, clothed in light, harrowing, arrayed in glory as if for war, looking down on you, prepared to exact upon you the just punishment for your ancient sin.

What will you say on that day?

“Father, I have sinned against heaven and before you.”

And the Father will not let you finish your confession. Rather, he will command his angels concerning you ‘Bring the robe of light, and wrap this my son in glory; put a ring upon his hand, for he with Christ and all his brethren shall rule over the new heavens and the new earth; and prepare the heavenly banquet, the eternal Eucharist and ever blessed wedding feast of the Lamb in his kingdom. Come, let us eat and celebrate,

‘For this my son was dead, and is alive again; he was lost, and is found.’”