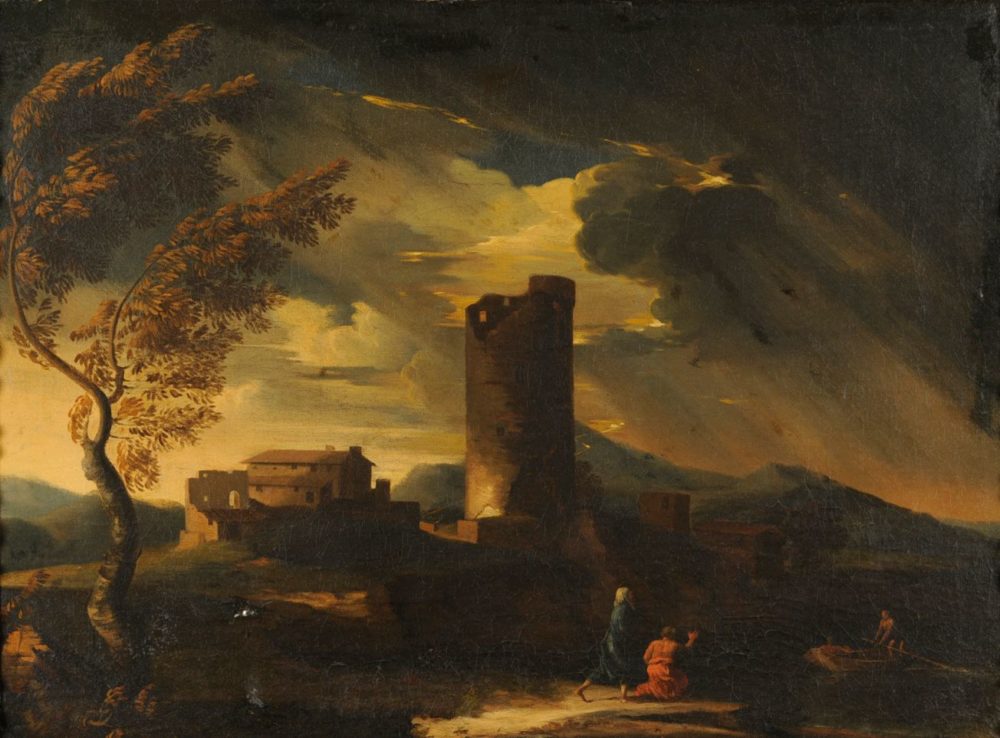 Sermon for the Fifth Sunday in Lent

“A man planted a vineyard.”

Our Lord speaks to us in a parable. He begins: “A man planted a vineyard.” St. Matthew adds a few details to the story. “There was a master of a house who planted a vineyard, and put a fence around it and dug a wine press and built a tower.”

The man is God, and the vineyard he planted is Israel, for it is written in the prophet Isaiah: “The vineyard of the Lord of hosts is the house of Israel.” This was the land which was given to the people of God after he had, in the plenitude of his mercies, delivered them from Egyptian bondage and heathen worship.

Jesus continues, saying that God put a fence around it, that is, he defended his chosen people by the invincible power of his providence. Indeed, the nation of Israel was weak, pathetic, and was no match for great Empires which arose all about it: [the Assyrians, the Persians, the Babylonians, the Egyptians, great warrior kingdoms whose armies’ arrows could famously blot out the sun with a single volley, so vast were their numbers, so terrible their might.] But the Law given Israel on Sinai granted them no king, and thus no leader to guide them in war. Israel was to know no war; they would inherit the land promised to them, and live there in peace, for God would be their king; his divine protection their bulwark against the gentiles.

Our Lord adds that in the vineyard, there was a winepress; and this wine press was the Temple. For just as a wine press crushes grapes to render its scarlet juices used to make wine, so too would the Holy Temple of God crush the bodies of slain beasts, of bulls and rams and sheep, rendering from them the wine of their blood, that through their suffering, the people of Israel might be given forgiveness. It is written that wine maketh glad the heart of men, so we see that it is the wine of the temple, the blood of sacrifice, which banished shame and purified souls, which made glad the hearts of men.

Then we read that the man builds a tower, which is nothing else than the Torah, the Law and holy order of life which would guide the people in the way of truth, and so keep watch over the vineyard of Israel.

Here we see the immeasurable mercy of God, for it was God alone who granted to Israel all these things. He employed no workers, he hired no laborers. He alone was the one who toiled to establish the nation, to protect it from ‘ten thousand nations round about’, he alone gave it wine to make it glad. And only after having done so does he bring in tenants, not that they might labor for their living, but rather that they might care for the paradise he had already planted.

Our Lord continues: “And he leased it to tenants.” These tenants are the priests and Levites, those left by God to care for the vines, that is, the people of Israel. These are those entrusted with nurturing God’s children, that they might grow into the fullness of his divine love.

The Lord of the vineyard sends to the tenants his slaves, which were the ancient prophets, that they might hand over what belonged to the Lord, that is, all the consecrated nation of Israel over which the priests were to have care over. Yet the tenants take them and beat some, murder some others, and stone the rest, just as the priests did to the prophets, for they were unwilling to render to their Lord what was rightfully his.

For you see the priests had forgotten who they were; they had forsaken their ancient obligation to guide the people in the worship of the one true God. They had missed the old gods of the heathen; those that once surrounded them in Egypt; those which surrounded them among the gentiles. For those old gods were worldly gods, with worldly concerns, and which might confer worldly benefits, and being worldly minded, these profane priests attempted to wed the gods of this world to the one God in Heaven. Their vineyard is no longer the Israel of God, but the Israel of their own carnal design.

The parable continues: “Then the owner of the vineyard said, ‘What shall I do? I will send my beloved son; perhaps they will respect him.’” Our God is mercy; for having so often called for his people to return to him, being so often despised by them, he does not thus reject them. So Our Lord Christ, Son of Man and true Son of God, is made flesh in the womb of the humble Virgin. Perfect Love and Mercy are presented to Israel in Jesus. ‘They will respect my son.’

‘But when the tenants saw him, they said to themselves, ‘This is the heir. Let us kill him, so that the inheritance may be ours.’ And they threw him out of the vineyard and killed him.’

The priests, the scribes, the Pharisees would not return to God what was his own; rather, they would kill God’s Son, and take his inheritance. ‘And they killed him.’ No longer do we speak of ‘Christ,’ now we only speak of ‘Christ, the Crucified.’

‘What then will the owner of the vineyard do to them? He will come and destroy those tenants and give the vineyard to others.’

Indeed Israel was decimated: they had forsaken the guardianship of the Torah, and with their iniquity they profaned the winepress of the Temple; so God lifted from them his protection, and Zion was crushed by Roman swords.

They were stripped of the kingdom of heaven, having forgotten their calling, and the vineyard was given to the Gentiles, that is, to us, the baptized, to all those who recognize the Son by grace alone. The holy ministry has become the new tenants, the vines all the baptized, and the Church the new vineyard, wherein all who believe might grow up into all the life of God.

We have received the great gift of God. Yet Jesus does not tell this parable to confirm the Church, but to warn those who might marry the things of God to the things of men.

For remember, Jesus did not speak just to some Jewish priests and scribes, but he speaks to instruct us all now, for the parable has now acquired a new meaning, a more eternal interpretation; the Vineyard is no longer Israel, but Christ’s Church, the new Israel.

The fence erected about us is Michael and his angelic army, who do battle with the devil and all the damned creatures day and night, that we might be kept from sin and danger. The winepress is now the Liturgy, the Eucharist, the true sacrifice of Christ’s blood, the lamb of God, offered by Christ himself for the salvation of all the faithful, the blood poured out ‘to make glad the hearts of men,’ and the tower erected is the Gospel, that is, the message of Jesus’ uncontested conquest of sin, death, and hell; for it is to this Word that the Church holds fast, and it is this word which guides the Church in all her doings, and keeps her on the narrow way which leads to life.

And yet at every given time, the old heathen gods haunt us with their promise of worldly gain and pleasure, of worldly victory and success. And they do not demand that we forsake our God. Rather the old gods of America, of success, money, of pleasure, self-fulfillment; these gods are very reasonable; they only ask to wedded to the one God, even as Asherah was made the wife of The Lord by lost Israel.

And indeed many, perhaps most churches in our time have accepted this deal. They devote themselves to politics rather than theology; they condone every deviancy of body and soul; some in their depravity even sanction the murder of children. And, as if to mock our God, they claim to do all these things out of ‘Love.’

And yet, these churches though they may grow by their pandering and compromise—they are no longer the Church of Christ, but merely churches of men, or perhaps more so, synagogues of Satan. They speak the counsels of the prince of this world, for there is no truth in their mouth; and their inmost self is destruction.

Christian, whenever such thoughts enter your mind, whenever such temptation to compromise the faith to please unbelieving men attacks you, attend to the words of our Lord: “What then will the owner of the vineyard do to them? He will come and destroy those tenants and give the vineyard to others.”

Therefore, ‘Remember not the former things, nor consider the things of old.’ Cast to the wind the heathen gods of this world. Burn them with fire; and hold fast to Christ, to his words, for ‘whosoever is ashamed of the Son of Man and of the Gospel, of him shall the Son of Man be ashamed.’ But ‘the one who endures to the end will be saved.’

Hold fast to your holy Mother the Church, and to the endless army of saints gathered around her.

Reject the sensuality of the Nicolatians, and hold fast to the tree of life; endure the tribulations of this world, the hatred of the godless, and know that there will be for you no second death; despise Balaam and his false peace born of fear, and eat of the hidden manna. Be not adulterous, but chaste. Be not asleep, but awake. Take not to godless teachings, but keep the word of truth. Be not prosperous, but take up your cross, and follow God. For by baptism all these things are promised as already yours; merely hold fast to the Salvation won for you by our Crucified Lord.

‘To him who conquers, I will grant him to sit with me on my throne.’