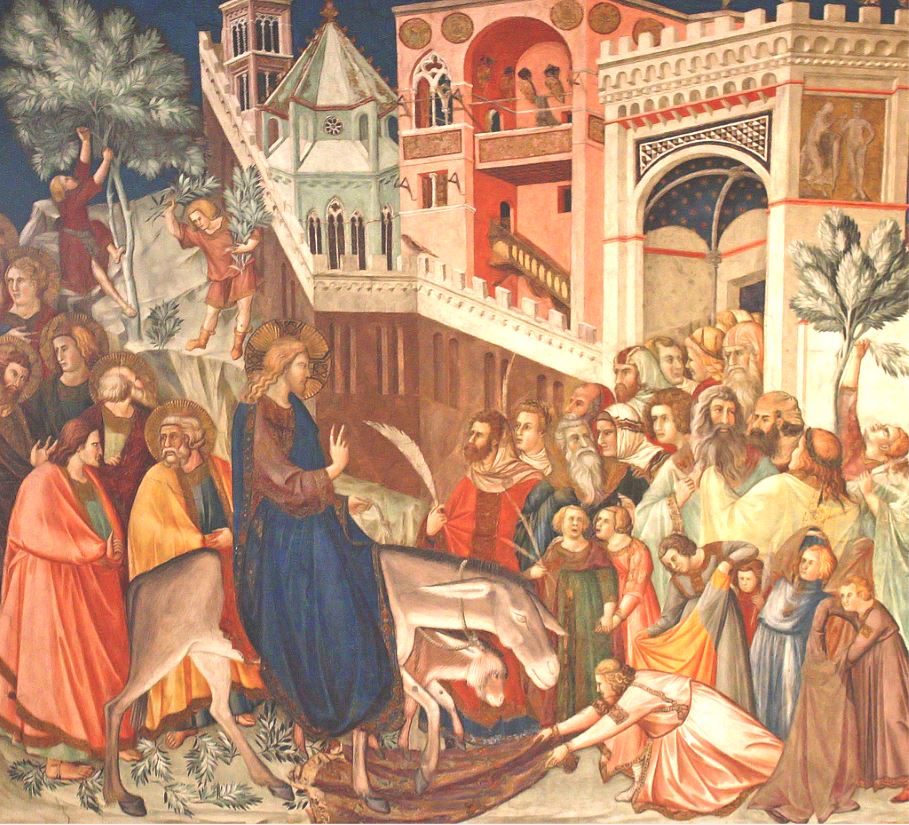 Sermon for the Feast of Palm Sunday

“And I, when I am lifted up from the earth, will draw all people to myself.”

Now He enters the city. Now does He confront humanity; Jew and Gentile, powerful and poor. He will indeed draw all people to himself.

People are drawn to everything that is shocking; they make no distinction between that which shocks out of beauty, and that which shocks out of ugliness. Men are equally attracted to viewing great works of art as they are to viewing grim train wrecks. They are equally attracted to glorious news as to inglorious gossip. Both stories of honor and stories of shame cause us to listen. Listen then, to the shame of the Son of Man.

Who is this that we so often speak of? This Jesus? This Christ? Who is born of a peasant family? Who spends his days with whores and traitors, which is what we mean when we speak of prostitutes and tax-collectors? Who is this who, blessed with such great powers, chooses to heal unbelieving, heathen wretches, but refuses to heal even His own neighbors? Who is this who has no loyalty to either family or country or religion?

He Himself, when His family is seeking Him, retorts ‘Who are my mother and brothers?’

He Himself, when His country calls Him, declares ‘My kingdom is not of this world.’

He Himself, when His priests speak to Him, answers ‘You devour the houses of widows, and for a pretense, you make a long prayer.’

A man with enemy combatants hanging on His words, and prostitutes kissing His feet, drinking wine late with traitors, and scorning His own father and mother; homeless, unemployed, living off the work of others, a freeloader; a parasite.

A most shameful man. Let Him face a shameful death.

Then strip Him naked. Show Him to be the fraud that He is. Now scourge Him. Let His blood wet the streets of our city. Punch Him in the face, then beat His body. And now let us kill Him; He is an infamy, a disgust to our people. But how? Let us kill Him in the manner of the worst criminals, the death we give only to murderers and sex-offenders, for He is surely worse than they. He will be crucified. But is that enough?
Make Him carry His cross, drag it up to the execution site, even as He bleeds upon the soil. Perhaps the crops will grow better knowing that they are watered with the blood of this hateful man.

Now take His garments. Now nail Him down. Now lift Him up, that all might come and look upon this outcast.

‘For when he is lifted up from the earth, he will draw all people to himself.’

It is God’s way to reveal His glory in humility, even as we are to find our joy in suffering. For He is a God who cloaks Himself in shame. For only in shame can His glory be known.

Listen to the voice of the angels of the throne of God as the lamb opens the seals: ‘Come and see.’

Come and see, the majesty of God revealed in the humiliation of the Son of Man. For though we fix our gaze this week upon the passion and crucifixion of the Christ, we hope to see there the glory and redemption of the eternal God. And rightly so, for He is lifted up, that He might ‘draw all people unto himself.’

Therefore, listen, and look; the passion of our Lord. The shame He embraces, He embraces for the honor He will bequeath to all who hear Him, that we might be made sons of God. The damnation He grasps, He grasps that we might inherit eternal life. Listen, and behold:

‘For the hour has come for the Son of Man to be glorified.’